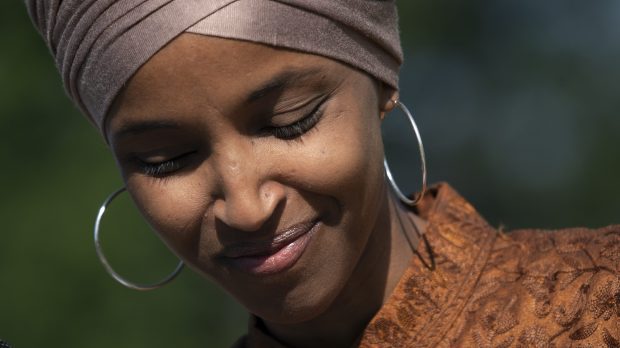 Posted By: Patriots4Truthon: September 02, 2019In: Politics

According to a complaint filed with the Federal Election Commission (FEC) earlier this week, Representative Ilhan Omar violated campaign finance law by using tens of thousands campaign dollars to pursue an adulterous relationship with Tim Mynett – a married Democratic consultant.

FEC records indicate that Omar’s campaign had disbursed $223,000 to Mynett’s company, E. Street Group, LLC, between August 2018 and June 2019, mainly for fundraising consulting. However, on April 1st, records show that her campaign made payments to E. Street Group for “travel expenses.”

Less than a week later, the Democratic consultant confessed to his wife Dr. Beth Jordan Mynnet that he was having an extra-martial affair with the Somali congresswoman, according to a divorce filing that was submitted earlier in the week Mynett’s wife.

Within the divorce filing, Dr. Beth Mynett wrote that her husband’s “more recent travel and long work hours now appear to be more related to his affair with Rep. Omar than with his actual work commitments.”

Throughout April and June, FEC records indicate that $21,547 was disbursed by Omar’s campaign to pay for ‘travel expenses’ for E. Street group.

As per business filings that were submitted to the D.C. Department of Consumer and Regulatory Affairs, 38-year-old Tim Mynett is a partner of E. Street Group, LLC.

According to the FEC complaint that was filed earlier in the week by the center-right National Legal and Policy Center (NLPC), the timing of Representative Omar campaign’s travel reimbursement to Mynett’s company coinciding with the beginning of the alleged affair between the two is quite suspicious.

In its complaint, the NLPC wrote: “If Ilhan for Congress reimbursed Mynett’s LLC for travel so that Rep. Omar would have the benefit of Mynett’s romantic companionship, the expenditures must be considered personal in nature.”

Also in its complaint, the NLPC mentions that FEC regulations bar the use of campaign funds for personal travel except when the candidate’s personal finances are used to pay back their campaign.

The NLPC said that “Omar’s filings do not reveal subsequent reimbursements for Mynett’s travel.”

This isn’t the first time Omar has been accused of misusing campaign funds. Just last year, a Republican state representative accused of using $2,250 in campaign money to pay a lawyer for divorce proceedings.

In recent months, Tim Mynett and Omar have been pictured together at several events. In March, Mynett was seen by the congresswoman’s side during a fundraiser for CAIR where she infamously described the 9/11 terror attacks as simply “some people did something.”