Why we believe in polls … and should not 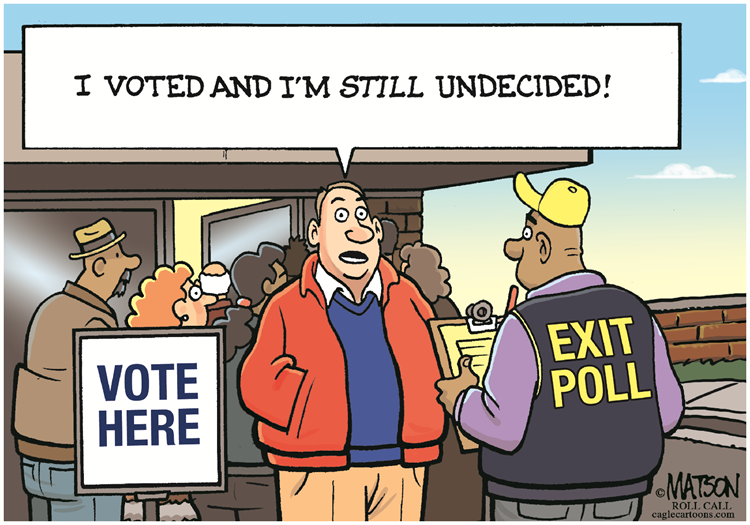 As a lifelong political analyst, I have had to deal with polls – all kinds of  polls.  I have even had to construct them for clients.  Those years of experience have taught me that polls are merely events to give reporters something to report or to deceive the public.  Yep!  Deceive, not inform.

Polls only give an approximation of fact at best – or merely the APPEARANCE of facts that do not exist.  They gain credibility because all those reporters and columnists report polling results as fact – as if the information is accurate.  For example, they may say, “Today’s Gallup Poll shows that 49 percent of voters now approve of President Trump.”

That sounds convincing.  But what about the Quinnipiac Poll of the same day that says, “Trumps popularity has declined to 42 percent.”  That seven-point difference represents millions of voters.  So, who is correct?  Is either correct?  We really do not know.  Still, the polls are given maximum exposure and credibility in the media.

Then there is that “margin of error.”  One might assume that the results of any elections should fall within that range – but they often do not.  So what value is the “margin of error” when the “error” falls outside the “margin.”

To show just how inaccurate these polls can be, you should recall that, in the New Hampshire primary, the networks reported that 48 percent of the voters did not make up their mind until 24 hours before they voted.  Almost half the voters were undecided before then.

Weeeeell … what about all those polls taken in the previous weeks in which 80-plus percent of the voters told their preference long before election day.  By most polls, the “undecideds” leading into the primary were somewhere between 10 and 20 percent.  Obviously those two reports could not have both been even remotely true.

You must also consider who is doing the polling.  Polling firms, such as Gallup and Quinnipiac, are considered to be the most objective – but even then, it may depend on who pays for the poll.  Biases get built in.

Campaigns often take two polls – a public-consumption poll to indicated that they are doing well and a private poll to see where they actually stand.  On the surface, both polls look very legitimate, but subtle variations in the questions will influence  public opinion.

Polls also have a very short shelf-life.  They will mostly approximate an outcome on the eve of an election – and even then, they can be egregiously wrong.  No political advisor or analyst would believe that polling done long before an election has any bearing on the ultimate results.

Polls that show President Trump behind his Democrat opponents mean nothing … yes, nothing … in predicting the outcome of the November election.  Keep in mind that President Obama had polling numbers worse than Trump’s at around this time before his re-election.

One of the greatest examples of meaningless polling is the so-called national popularity poll.  It is irrelevant to the outcome of a presidential election because it counts a lot of folks who will not be voting.  Even worse.  It does not take into consideration our Electoral College system.  One only need recall that Hillary Clinton was consistently more popular than Trump in the 2016 election.

In many ways, polls are the opiate of politics.  We are hooked on them even though they offer no real benefit other than to provide a desired alternate reality.

2 thoughts on “Why we believe in polls … and should not”