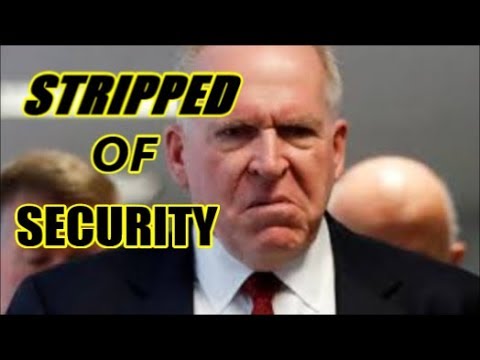 Former Director of the Central Intelligence Agency (CIA) John Brennan just got his top-level security clearance stripped away. It quickly became THE major story of the day. News anchors and their parroting panelists waxed on about the implications and the ramifications of the action. They even obsessed over the date the announcement was drafted, as if that had deep meaning.

Since the action was taken by Trump, the speculation by the left-leaning media folks again ran to the potential collapse of the Republic. The move against Brennan was declared to be an unprecedented abuse of power. Trump was roundly accused of doing it to punish a political enemy – as if that never happens in politics. That still leaves open whether Brennan deserved it. Did Trump have a valid reason to end Brennan’s access to highly sensitive information regarding national security?

To answer that question, one has to ask what Brennan was doing with his security access. Did he have a productive or compelling reason to retain his security status? Was it in the national interest?

Some of Brennan’s defenders argued that with his security clearance, he could assist current intelligence officials. He could use his institutional memory to give advice and counsel to the new Intel chiefs. That sounds good in theory, but Brennan has undermined that theory with his behavior.

First of all, while Brennan can no longer be privy to ongoing operations, he could still answer questions and offer opinions based on his past experience. He would only be half out of the loop. More realistically, Brennan had already made himself persona non grata at every intelligence agency. He had become a political loose cannon, and no one wanted his advice in exchange for access.

Brennan ceased to be a qualified and dependable intelligence asset when he decided to become a political antagonist to the president. Rather than using his access to sensitive security information to help the president develop and implement policy, Brennan began to use his knowledge and access to undermine administration policies. In his effort to bring down the president politically, he was undermining the good and necessary work of the entire Intel community.

To spread his anti-Trump narrative, Brennan played loose with truth and facts – acting more like a politician than an intel officer. He accused the president of acts of collusion that neither Brennan nor anyone else outside of Special Counsel Robert Mueller’s office could know. His screeds and rants reached a crescendo when he literally accused the President of the United States of treason.

Brennan made himself the bad example as to why we do not want our intelligence leaders to become partisan political operatives. He politicized himself to such an extent that even many of his allies and defenders on CNN and MSNBC say he went too far.

In response to the president’s action, Brennan stoutly proclaimed that he will not be silenced – as if anyone expected he would. The stripping of his security clearance was never intended to silence him. It was intended to prevent him from accessing intelligence information that he could – and would – weaponize against Trump. His actions not only made him an enemy of Trump, but an enemy of the Republic.

While it is a long ago and an extraneous issue, I still cannot forget that he voted for the Communist Party Presidential candidate during the height of the Cold War. In the hypersensitive world of national security, one might think that alone would have prevented his even being hired by the CIA, much less rising to the top. I thought the CIA’s job was to weed out and fight against Communist sympathizers. While it did not, it is fair to judge his political philosophy and how it might have come into play in pointing the Russian meddling issue in the direction of the Trump campaign.

In terms of the Brennan issue, the #NeverTrump media is recklessly throwing around abuse of power and obstruction of justice charges as political flak. Since the president has the unfettered power to remove the security clearance of anyone at any time and for any reason, Trump was well within his power to strip Brennan of his clearance. Unlike the free-wheeling journalists, most of the lawyers on both sides did not see this creating an obstruction problem for the president.

So, what IS the effect of taking away Brennan’s security clearance? Not much. Perhaps it should have been automatically suspended when he left government service. Or at least, it should have been extended if there was some national purpose and benefit.

Despite the media huffing and puffing this story up like a hot air balloon, the aftermath will have no measurable effect on anything happening in Washington. Nothing will change. Brennan will continue to be a welcomed guest on the anti-Trump media circuit. He may be the target of an occasional Trump tweet. Those who love him will love him, and those who hate him will hate him – just another media-driven tempest in a teapot.