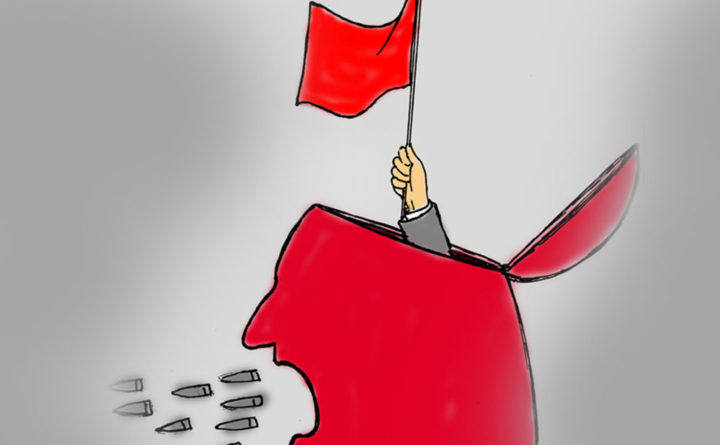 Seventeen states and the District of Columbia have passed red flag anti-gun laws that allow a judge to sign a legal order allowing police to raid the property, with no prior knowledge or consent, of someone accused by someone else of being mentally unstable.

Forget due process. No crime has been committed. A family member with a grudge or a friend you owe money might sign a petition that questions your sanity and ability to handle a firearm responsibly. Perhaps it is a healthcare professional or law enforcement official who makes the anonymous accusation.

No matter – if a judge can be persuaded that the targeted individual sounds crazy enough to be a threat, the police will be authorized to conduct a raid and confiscate personal property with no formal charges or legal defense as required by U.S. law.

After 31 people were killed in recent mass shootings in El Paso, Texas, and Dayton, Ohio, a bipartisan effort is using the public outrage, whipped up by the liberal press, into a feel-good call for action that grossly oversimplifies a very complex social issue.

Supporters of red flag laws believe that, since sociopathic mass shooters are mentally ill, taking guns away from people who own guns and are rumored to be psychologically unbalanced must be a good way to solve the problem. A mass murderer deprived of a firearm will pick up a knife, drive a car or shoot acid out of a squirt gun.

Now, Senators Lindsey Graham (R-SC) and Richard Blumenthal (D-CT) wrote legislation that announced federal support for states that voluntarily surrender their state’s rights and pass red flag laws. This is institutionalized bribery, of course, and shows no sign of slacking.

“My goal is to have a system that can identify truly a person about to blow, and do something about it before it’s too late,” said Graham, who also stated that mass shootings “involved individuals who showed signs of violent behavior that are either ignored or not followed up. State red flag laws will provide the tools for law enforcement to do something about many of these situations before it’s too late.”

President Trump is accelerating the gun grab by giving a thumbs-up to extreme risk protection orders (ERPOs) on August 5, 2019:

“We must make sure that those judged to pose a grave risk to public safety do not have access to firearms and that if they do, those firearms can be taken through rapid due process. That is why I have called for red flag laws, also known as extreme risk protection orders.”

The following states have already turned away from the 2nd Amendment and down the slippery slope of eroding due process in the U.S. The kind of person who is allowed to submit a red flag petition is also shown:

Connecticut: One state attorney or any two police officers

All states allow ex parte orders to confiscate a flagged person’s firearm without official notification. The identity of the accuser remains anonymous for the duration of the ex parte order, which can be executed quickly but holds for a short time. Most states require a court hearing to issue a final order to take away the weapon for a longer period of time. The flagged individual has the opportunity to contest the order at this hearing.

Colorado jumped on the red flag bandwagon in a big way on April 12, 2019, when Gov. Jared Polis signed HB 1177 into law, making the state #15 on the anti-gun-toting list. Talk about a good idea that could go horribly wrong:

“Under Colorado’s recent law, anyone at all can make a phone call to the police. They don’t even have to be living in the state. There is no hearing. All the judge has before him is the statement of concern.”

Weld County Sheriff Steve Rheams spoke for many when he said during a public radio interview:

“Just taking someone’s firearms away and leaving them in place doesn’t solve the problem in my mind. It could actually make it worse in some scenarios. And you know, we’re just, we’re kicking the can down the road to deal with the mental health issue.”

“We are a western state with a libertarian streak. We are a strong outdoors state with hunting and fishing. And so I think all of those make for a more nuanced discussion on this issue.”

Rather than being innocent until proven guilty, a person whose gun has been confiscated has the burden of proof to show that s/he is no longers a threat. This is the opposite of the way the American legal system is supposed to work. Yet, no one seems to care about that little legal detail.

Sheriff Rheams is a staunch supporter of the Constitution and said he’d go to jail rather than follow a court order to take away someone’s guns without due process:

Counties across the nation calling themselves “Second Amendment sanctuaries” are defying the unconstitutional red flag laws.