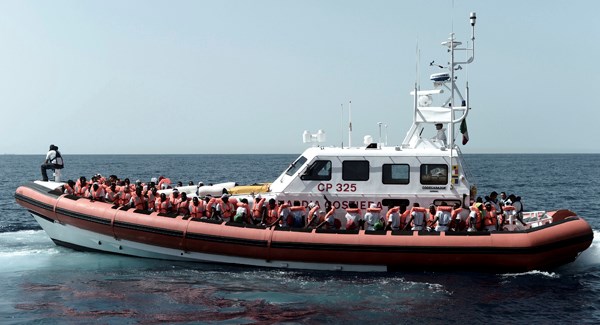 The Italian Council of Ministers – the principal executive organ of the Italian government – has authorized a new security degree drawn up by national populist interior minister Matteo Salvini that will restrict the activities of NGOs responsible for transporting illegal migrants into the country.

According to a report from Il Giornale, new provisions will grant the Italian government the authority to seize sea vessels from ‘civil society groups’ which breach government sanctions or that try to illegally enter Italy’s territorial waters with illegal migrants on-board.

One portion of the security decree will provide intelligence and police services with more freedom to use wiretaps and undercover operatives to fight illegal human trafficking into Italy.

Article One of the new security decree explicitly states that the Interior Minister now has the authority to “restrict or prohibit the entry, transit or parking of ships in the territorial sea, except in the case of military ships or ships in non-commercial government service, for reasons of public security and order.”

Apart from having their boats seized, captains who disregard the decree will face fines of 10,000 to 50,000 euros.

The authorization of this new security decree marks a significant step in the fight against illegal human traffickers and the migrant transporting NGOs who have aided them for years with impunity.

In fact, Pia Klemp, a German migrant transport vessel captain, is currently facing trial in Italy for her alleged collaboration with human traffickers. If she’s convicted, she could be faced with up to 20 years in prison.

Another portion of the new legislation enacts tougher penalties for individuals who assault police officers during political demonstrations. When asked about this section, Salvini explained: “I do not think that freedom of thought passes through instruments such as firecrackers, bats, and sticks.”

The new decree comes after the country’s 2018 migration and security decree which got rid the humanitarian residency permit and invested several million euros into funding deportations of illegal migrants.

Last year’s legislation addressed problems associated with far-left and Roma squatters and opened up the option to revoke Italian citizenship from convicted terrorists.

But the Italian government isn’t the only one in Europe taking meaningful measures to put an end to mass migration into the continent from the third world.

Last year in February, the Hungarian government also announced new legislation – called the Stop Soros bill – that would make it possible to imprison NGOs and individuals who help to facilitate illegal migration.

Currently, that legislation is in the midst of the standard process of public debate.