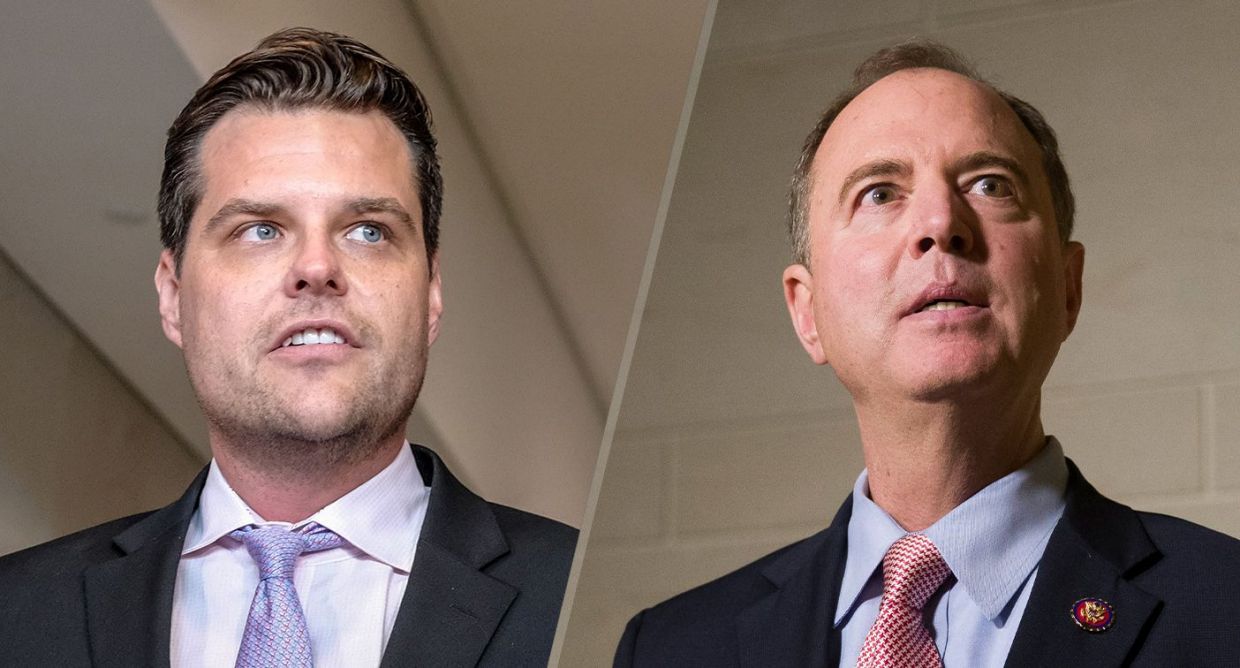 Satunch Trump supporter, Rep. Matt Gaetz, R-Fla., literally got the boot on Monday when he tried to sit in on the testimony of a Fiona Hill, former top National Security Council expert on Russia who was appearing on Capitol Hill as part of the House impeachment inquiry into the president.

Gaetz, who sits on the House Judiciary Committee, attempted to attend the testimony of Hill, but was told that because he was not a member of the House Intelligence Committee that he had to leave. The House Intelligence, Oversight and Foreign Affairs committees are conducting the impeachment inquiry into Trump.

A frustrated Gaetz aired his disappointment to reporters after being told he was not welcome to sit in on the hearing, venting his anger over what he says are “selective leaks” by House Intelligence Committee Chairman Adam Schiff, D-Calif., and questioning why he was not allowed to be present during Hill’s testimony. Gaetz added that the chairman of the House Judiciary Committee, Rep. Jerry Nadler, D-N.Y., was involved in the impeachment inquiry.

“It’s not like I’m on agriculture,” Gaetz said. “What are the Democrats so afraid of?”

A visibly annoyed Gaetz followed his comments with a tweet calling the impeachment inquiry a kangaroo court and using one of Trump’s favorite nicknames for the intelligence committee chairman, “Shifty Schiff.”

“Judiciary Chairman [Jerry Nadler] claimed to have begun the impeachment inquiry weeks ago,” Gaetz tweeted. “Now, his own Judiciary members aren’t even allowed to participate in it. And yes – my constituents want me actively involved in stopping the #KangarooCourtCoup run by Shifty Schiff.”

Other Republicans closely aligned with Trump continued on Monday to complain about Schiff and his handling of the impeachment inquiry – with Rep. Jim Jordan, R-Ohio, also lambasting the California Democrat for excluding some congressional Republicans from the testimonies and for leaking “cherry-picked” information from the closed-door hearings to the press.

“She was going to come voluntarily but he’s going to subpoena her I believe so he can ask certain questions and again keep those secret except for the certain things that he wants to leak, the cherry-picked information to the American people,” Jordan said of Schiff before Hill appeared on Capitol Hill to testify. “The tragedy here and the crime here is that the American people don’t get to see what’s going on in these sessions,” Jordan said.

Hill’s testimony comes ahead of a planned Thursday appearance by Gordon Sondland, Trump’s hand-picked Ambassador to the European Union, and follows the revelation of a cache of text messages from top envoys, which have provided a vivid account of their work acting as intermediaries around the time Trump urged Ukraine’s new president, Volodymr Zelenskiy, to start investigations into a company linked to the family of a chief Democratic presidential rival, Joe Biden.

One witness who may not be called before Congress is the still anonymous government whistleblower who touched off the impeachment inquiry. Top Democrats say testimony and evidence coming in from other witnesses, and even the president himself, are backing up the whistleblower’s account of what transpired during Trump’s July 25 phone call with Zelenskiy.

Schiff said Sunday, “We don’t need the whistleblower, who wasn’t on the call, to tell us what took place during the call. We have the best evidence of that.” He added it “may not be necessary” to reveal the whistleblower’s identity as the House gathers evidence.

“Our primary interest right now is making sure that that person is protected,” Schiff said.