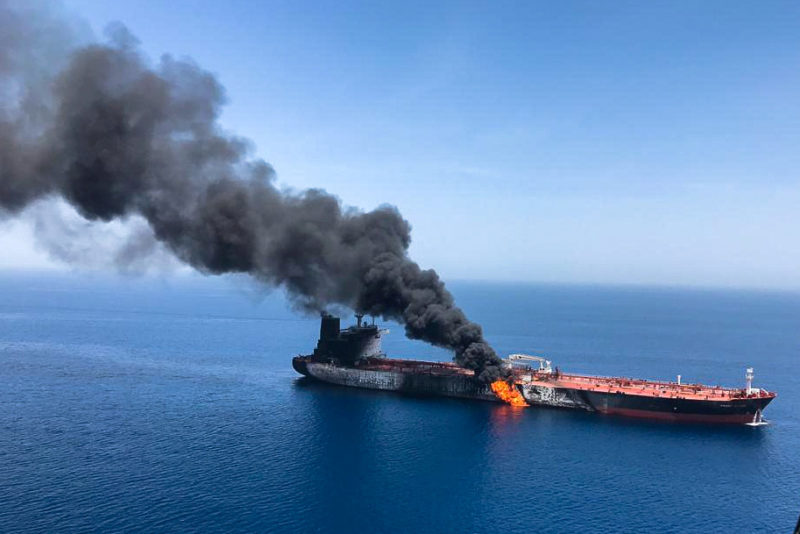 Just a couple of days after two oil tankers were attacked in the Gulf of Oman, some U.S. allies in Europe have been reluctant to join the U.S. government in blaming Iran outright.

On Friday, following the attacks, the Pentagon released a video which they claim depicts an Iranian patrol boat full of Revolutionary Guard soldiers removing a mine from the side of one of the targeted boats in last week’s tanker attacks in the Gulf of Oman.

Officials from inside the Pentagon have claimed this video footage is “proof” that Tehran was indeed behind the attacks. Of course, the Islamic Republic has fiercely denied having any involvement in the attacks.

Although neoconservative war hawks in Washington like John Bolton, Mike Pompeo, and others have already started to beat the drums of war, many of their counterparts in Europe haven’t been so quick to initiate what would surely end up turning into a global conflict.

Some European governments have refused to back the validity of the Trump administration allegations and the video footage which it claims is clear proof that Iran was responsible for the attacks on two oil tankers in the Gulf on June 13th.

On Friday, during a press conference, Germany’s Foreign Minister Heiko Maas called into question the evidence which the U.S. government claims is proof that Iran was behind the attacks, saying the video footage was insufficient to corroborate their claims.

“The video is not enough. We can understand what is being shown, sure, but to make a final assessment, this is not enough for me,” Maas asserted.

Maas’s sentiments were was echoed by Nathalie Tocci, a senior adviser to EU policy chief Frederica Mogherini, who also emphasized that before casting blame, “we need credible evidence.”

European Union officials have called for “maximum restraint” on all sides.

Yutaka Katada, the president of the Japanese company operating the tanker, has also questioned the theory that a mine was used to carry out the attack on the boat. In contrast to the narrative currently being espoused by the U.S., Katada told reporters that members of his crew had witnessed a flying object before the explosion occurred.

“I do not think there was a time bomb or an object attached to the side of the ship. A mine doesn’t damage a ship above sea level. We aren’t sure exactly what hit, but it was something flying towards the ship”, Katada said.

Chris Williamson, a member of the British Parliament under the Labor Party, had this to say about the United States’ response to the attack: “Whether it’s an attempt to remove Venezuela’s democratic government or regime change in Iran, the USA is causing global instability in furtherance of its imperial interests. We must reject the lies being used by the Trump admin to gain public support for their disastrous plans.”

Conversely, officials inside the UK’s ruling Conservative government have backed the US assessment, with Foreign Secretary Jeremy Hunt declaring that the Islamic Revolutionary Corps – a designated terrorist organization by the Trump administration – was “almost certainly” behind the attack.

At the same time, officials in France have been reluctant to take sides. Although the did condemn the attack, they refrained from commenting on whether it had looked at and/or made assessments of CENTCOM’s video, US intelligence, and other evidence.

On Friday, during an interview with his favorite mainstream media broadcaster Fox News, Donald Trump insisted upon Iran’s guilt, saying, “Iran did do it and you know they did it because you saw the boat. You saw the boat at night, successfully trying to take the mine off and that was exposed. I guess one of the mines didn’t explode and it’s probably got essentially Iran written all over it.”

Meanwhile, Iran’s Foreign Minister Mohammed Javad Zarif, referred to Washington’s allegations as “sabotage diplomacy”. The Iranian mission to the United Nations implored the US and its allies in the region to stop “warmongering” and to stop its false flag operations in the Middle East.

Last week’s attacks follow another incident that occurred in May where four oil tankers were targeted close to a United Arab Emirates port. Officials from the US and the UAE also accused Iran of being behind these attacks, but Tehran has repeatedly and adamantly denied the allegations.