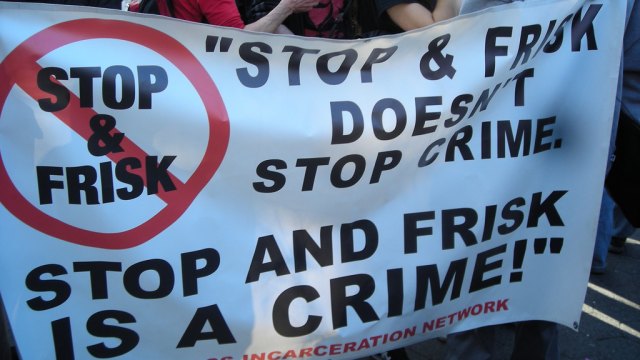 Trump Raises the Issue of “Stop and Frisk”

President Trump has been calling for the return of the police procedure commonly known as “stop and frisk.” Basically, it means that if a police officer has reason to believe that a person is carrying a gun, possesses illegal drugs or has pocketed stolen loot, he can detain the person and search him or her.

The practice was green-lighted by then-New York Mayor Rudy Giuliani to combat a rising crime wave in the Big Apple. It is credited with reducing crime and getting a lot of guns off the street.

By the time Trump uttered “stop and ….,” his critics were already piling on. Those know-it-alls of cable news assembled panels to pronounce the President a fool. Doesn’t he know that stop and frisk is unconstitutional? Doesn’t he know that it was a federal judge in his own hometown of New York who declared it so? What a dummy.

Facts be known, if there are any dummies in this debate, they are all those folks on the telly who said stop and frisk is unconstitutional. First of all, such a declaration by a District Federal Court is not the final word on the subject. It can go up to the Federal Appellate Court and then on to the Supreme Court.

This is not the first time Trump created controversy with his call for stop and frisk. During a campaign debate, he was shot down by both Hillary Clinton and moderator Lester Holt for not knowing that it had been declared unconstitutional in New York City. They were correct that the manner in which it was carried out had been declared unconstitutional, but not the practice itself.

What was declared unconstitutional by New York federal Judge Shira Scheindlin was the WAY it was being implemented. It was being used primarily against minority citizens and that, said Scheindlin, was unconstitutional racial profiling – essentially violating Fourth and Fifth Amendment rights.

It was not Scheindlin’s intention to ban stop and frisk when fairly implemented. So, as to avoid any confusion – though she obviously did not — Scheindlin specifically wrote in her opinion that she was “not ordering an end to the practice of stop and frisk,” but ONLY how it was implemented in New York … period.

One can debate the effectiveness of stop and frisk or the fairness of it. You can agree with Trump that it would help curtail crime or believe the critics that it is inherently an abusive practice. But what is not debatable is that stop and frisk is 100 percent constitutional if carried out in an unbiased manner – as it is by many police departments today.