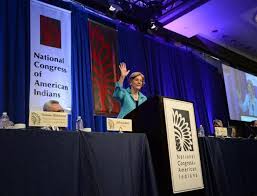 Massachusetts Senator Elizabeth Warren has issued her long-sought DNA report along with a campaign-style video romanticizing her claimed Indian heritage. Before we get to addressing the new information that she has provided, we should look back on the life of First Lady Edith Wilson, wife of President Woodrow of the same last name.

Mrs. Wilson? What on earth could that Victorian-born lady have to do with Elizabeth Warren and Indian ancestry? Well, allow me to explain.

First Lady Edith made quite a stir in the upper circles of society when she “revealed” her Indian ancestry. Ironically, this was a time when Indians were not held in high regard. In fact, they were still considered a subspecies by the snobby elite – of which Edith and white supremacist Woodrow were members-in-good-standing.

Edith, however, was not just given the nickname “Pocahontas” but actually claimed descendancy from the famed Indian princess. The grand ladies in the parlors and the gentlemen in the smokers were not put off by Edith’s claimed bloodline because she was … get ready for this … royalty.

She was a much sought-after dinner guest among American society and the Brits – who still had real royalty at the time. In advance of a trip to England, one headline read, “To be greeted as was Pocahontas in 1616, England prepares for President’s wife.” Based on her claimed ancestry, Edith was given the task of providing Indian names for American battleships.

Yes, I know she was the wife of a president and would automatically be popular among the upper crust, but her claimed descendancy from Pocahontas preceded her marriage to Woodrow and was a substantial social enhancer. Edith didn’t even need a DNA test to have her word accepted. The woman was believed … period. Conversely, Warren’s ethnic #MeToo moment has been far less successful.

And what about Warren’s claim?

It would appear that in an attempt to establish her oft-stated claim of Native American ancestry, she proved the opposite. Her private test reported the “probability” of Indian ancestry – probability. It could be that she is 1/1024th Native American – maybe.

Prior to this recent DNA test, Warren relied on her “high cheekbones” to legitimatize her claim. I guess you could argue that Warren’s entire effort to sell the Indian blood story was rather … cheeky. I shall pause until you finish groaning.

Back to the point. Under any objective or official standard of judging ancestry, Warren’s results would mean that she is NOT Native American. Not Indian. Not Cherokee – the tribe she adopted. Warren’s position in our nation’s capital does not even qualify her to be on the same field as the Washington Red Skins.

That is also the opinion of her adopted Cherokee Nation. They issued a statement that said Warren’s claim, “makes a mockery out of DNA tests and its legitimate uses while also dishonoring legitimate tribal governments and their citizens, whose ancestors are well documented and whose heritage is proven.” It went on to accuse Warren of actually “undermining tribal interests with her continued claims of tribal heritage.”

You can put Warren’s claim alongside that of her Democrat colleague Connecticut Senator Richard Blumenthal, who falsely claimed to have fought in Vietnam. Both used dishonest resume enhancers to further their careers. Shame. Shame. Shame.

Oh! And what about that “me” in the headline? Yes, that “me” is me. You see, my DNA showed that I am one percent Nigerian. According to the Warren theory, I should have been claiming minority status when I was applying for college admission, scholarships, government contracts, and even private sector jobs. Maybe I could have headed up one of the chapters of the NAACP like Rachel Dolezal, who pretended to be Black to get the job in Spokane, Washington. Unfortunately, I was not aware of the Warren rule of genetic ancestry at the time.

FOOTNOTE: Many on the politically wrong on the left claim that “Indian” is a pejorative – a slur. That claim is usually issued by a bunch of palefaces residing on the east and west coasts – well-tanned palefaces in the case of the west coast. This writer follows the lead of the Indians themselves. I was once made an “honorary Indian” by the folks at the Indian Center in Chicago. I recall seeing Senator Warren, herself, giving a speech in front of a sign that read, National Congress of American Indians. I tend to use both “Indian” and “Native American” interchangeably, just as I use “Black” and “African American” interchangeably. So, there it ‘tis’