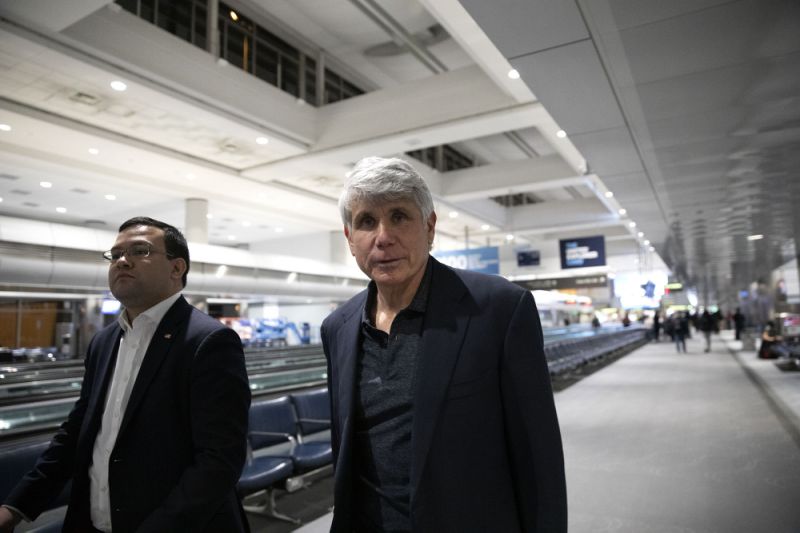 Trump, who seems to be focusing on correcting what he sees as miscarriages of justice lately, has long said that Blagojevich got a raw deal, and has been talking for months about commuting his sentence.

“Yes, we commuted the sentence of Rod Blagojevich. He served eight years in jail, a long time. He seems like a very nice person, don’t know him,” Trump told reporters on Tuesday.

A statement released by the White House revealed that Trump also pardoned former New York City Police Department Commissioner Bernie Kerik and financier Michael Milken. Kerik spent four years in prison from 2010 to 2013 after being found guilty of tax fraud and lying to government officials. Milken spent two years in prison from 1991 to 1993 and was fined $600 million on securities fraud charges.

Earlier in the day, it was announced that Trump granted a pardon to Edward DeBartolo Jr., the former owner of the San Francisco 49ers.

Blagojevich has served roughly eight years in prison after being convicted on corruption charges. He is expected to be set free from the Englewood Federal Correctional Institution in Colorado on Tuesday.

For many months now, the president signaled he might commute the former Democratic governor’s prison sentence. Trump said in August that he was “strongly” considering the move and that Blagojevich’s case was being reviewed.

The president appeared to back away from the idea about a week later after hearing strong opposition from a group of Illinois Republican legislators.

LaHood and Bost made the lawmakers’ case to Trump over the phone, and Trump appeared to be receptive to their argument, telling them, “I wish I had the perspective before.”

His wife, Patricia Blagojevich, lobbied for her husband’s early release and made appearances on Fox News in 2018 to make her case in the hope that the president was watching. Patricia Blagojevich began her media circuit after the former governor lost his last appeal to the Supreme Court.

Trump and the former governor know each other from Trump’s NBC reality television show The Celebrity Apprentice. Blagojevich appeared on the ninth season of the show in 2010. Trump fired him from the show but said the former governor had “a hell of a lot of guts” for the fight he was then putting up in court against the corruption charges.