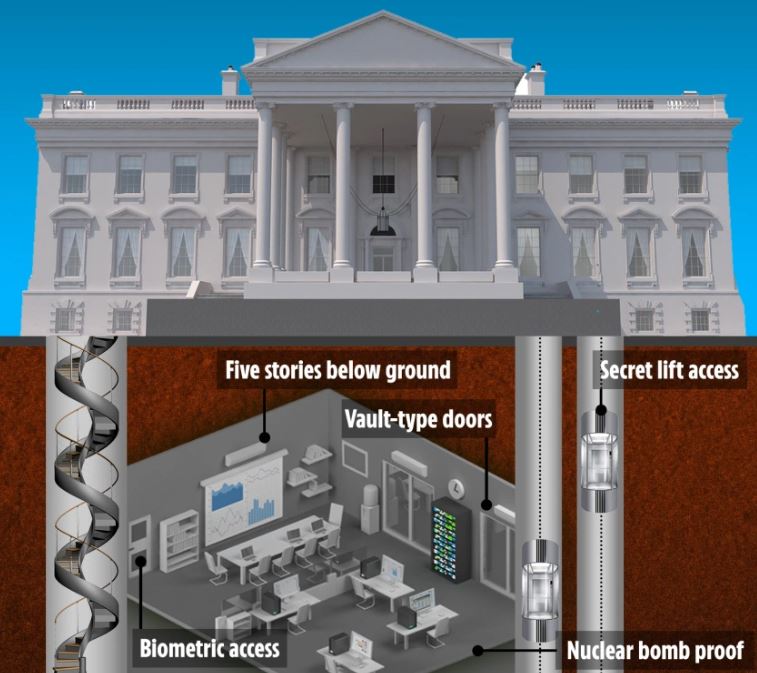 Agents reportedly rushed Trump to the Presidential Emergency Operations Center (PEOC) – which was used after the 9/11 terror attacks and is equipped with secret tunnels – on Friday night.

Trump was moved to the bunker before more than 50 Secret Service agents were injured during the sixth night of violence prompted by George Floyd’s Monday death, the New York Times reported.

It is located in the ground below the East Wing of the White House, but its exact placement is kept secret.

The PEOC was constructed to protect Franklin D. Roosevelt during World War II and was originally built to hold out against a direct nuclear hit.

The White House detailed that the PEOC can be accessed by an elevator “located behind multiple vault-type doors with biometric access control systems.”

The bunker has previously been utilized by Vice President Dick Cheney during 9/11, when authorities feared that one of the hijacked planes was headed towards the White House.

What is the Presidential Emergency Operations Center?

The Presidential Emergency Operations Center is a bunker-like structure underneath the East Wing of the White House.

It serves as a secure shelter and communications center for the president and his key staff in cases of an emergency.

The PEOC is differentiated from the White House Situation Room which is located in the basement of the West Wing.

During the 9/11 attacks, Vice President Dick Cheney, Secret Service agents and other staff were evacuated to the PEOC.

President Bush was in Florida at the time of the attacks.

Dramatized versions of the PEOC were featured in the 2013 films Olympus Has Fallen and White House Down.

The first White House bunker was constructed during WWII to protect President Franklin D. Roosevelt from an aerial attack on Washington.

Former First Lady Laura Bush opened up in a 2010 memoir about her experience during 9/11, describing that the bunker was accessed through “a pair of big steel doors that closed behind me with a loud hiss, forming an airtight seal.”

She witnessed “unfinished subterranean hallways underneath the White House” as she was taken to the PEOC.

Back in 1950, a White House underground tunnel system connecting the West Wing and East Wing were building, allowing access to the bomb shelter.

Another secret tunnel – which can be accessed through a secret staircase by the press of a wall panel – was created in 1987.

A book released earlier this year, titled The Trump White House: Changing the Rules of the Game, claims a bunker also exists under the North Lawn, according to the Washington Examiner.

“At least five stories deep, the bunker, which was completed near the end of Obama’s tenure, can house the staff of the entire West Wing indefinitely in the event of a weapons of mass destruction attack,” author Ronald Kessler wrote.

“After Trump became president, top staffers toured the bunker, whose existence is classified.”

As of Monday morning it remains unclear why the president was moved to the underground bunker, but it is known the Secret Service has protocols to adhere to when the building is threatened.

Sources told CNN that First Lady Melania Trump and their son, Barron, we also taken to the hidden bunker.

President Trump was in the bunker for less than an hour, the news outlet reported.

At one point, amid the riots, the lights which illuminate the White House were turned off – apparently so the Secret Service could use night vision to monitor protesters.

US Marshals, Drug Enforcement Administration (DEA) agents, and Secret Service agents have been sent onto the city’s streets to support under-pressure cops and Homeland Security agents.

The National Guard is also reportedly being drafted in to help combat rioting outside the White House and elsewhere in the nation’s capital.

Judd Deere, a White House spokesman, told the Times that officials would not comment on why the president was rushed to safety.

On Friday, the White House went into lockdown as angry crowds marched on the Capitol.