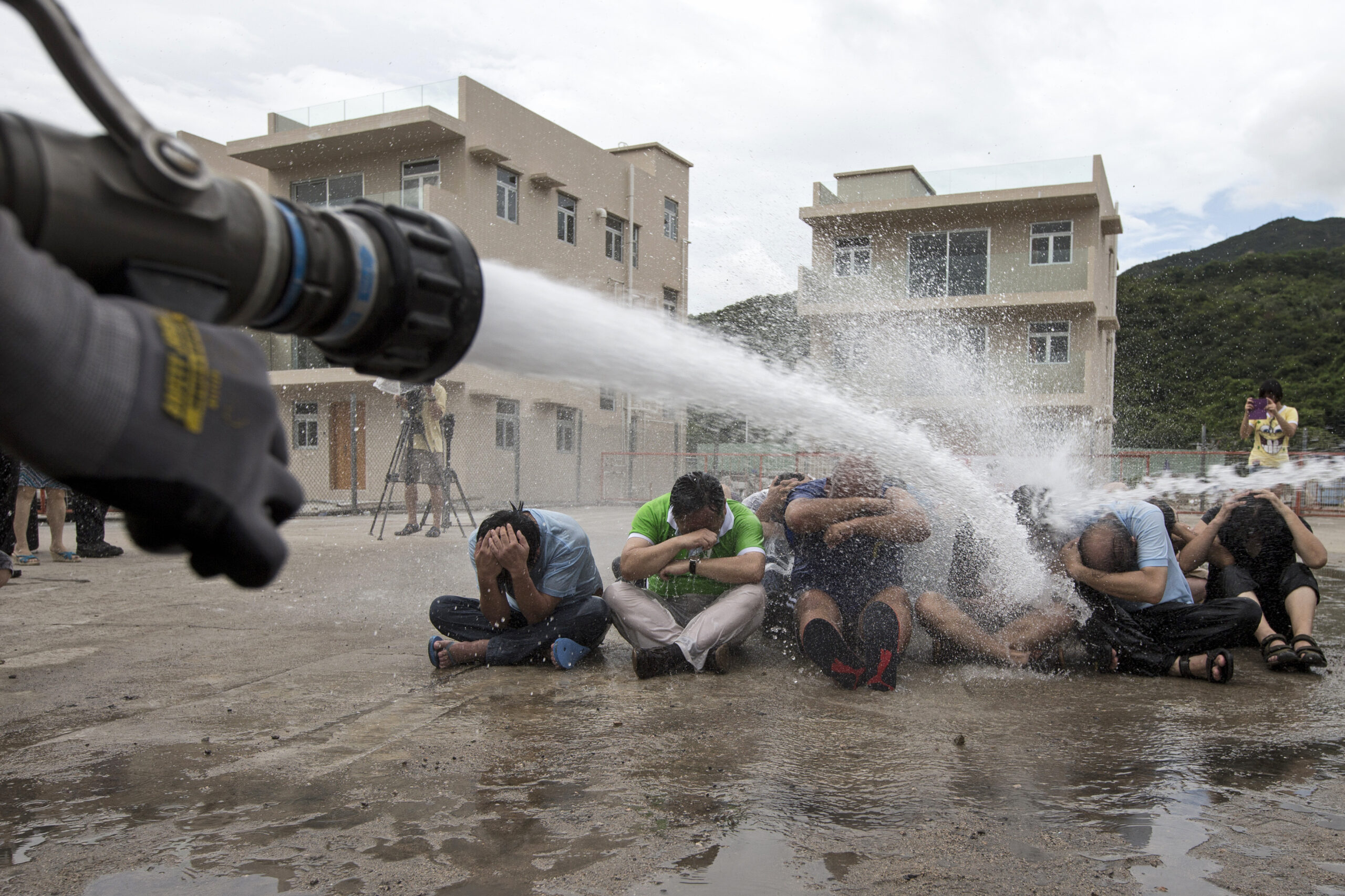 Pro-democracy activists brace themselves during a drill to simulate the scenario of being sprayed with a water cannon at the upcoming "Occupy Central" movement rally in Hong Kong September 7, 2014. According to the drill organizer, today's activity was conducted in preparation ahead of the Occupy Central civil disobedience event, which will block Hong Kong's central business district if Beijing does not allow the city to conduct a genuinely democratic election in 2017. REUTERS/Tyrone Siu (CHINA - Tags: CIVIL UNREST POLITICS SOCIETY) - RTR45877

Why the Chinese Don’t Have Opinions

An old Cold War joke reports an international poll that asks the same question in every country: “Excuse me, what’s your opinion of the meat shortage?”

The Israelis say, “What’s excuse me?”

No Chinese has ever run a community school board, a Little League association, or a volunteer fire brigade. For the past 2,500 years, and probably the past 5,000, orders in China have flowed downward from the top, through a vertical hierarchy. Everyone in the U.S. has an opinion about politics–we have to choose our leaders and spend a lot of time thinkingi about it. Our opinion matters. Political opinions don’t have an practical value in China, so the practical Chinese don’t bother having them.

China is run by a self-selecting committee of bureaucrats cherrypicked from the top 1/10th of 1% of university entrance exam scores. I won’t live in such a system. If someone tried to replace our Constitution with that sort of elitist arrangement, I would take up arms against it. But it is a catastrophic error to underestimate the Chinese, and it is merely petulant to complain about how nasty the ChiComs are. China’s economy will grow this year while ours will shrink. China crushed the COVID-19 pandemic (no, it’s not fake news) while we’re still trying to figure out what to do about it. China well may dominate Artificial Intelligence, the driver of the Fourth Industrial Revolution. Its government will spend $1.2 trillion on tech investments during the next five years, dwarfing what we spend. We aren’t dealing with a bunch of Marxist ideologues, but with a 5,000-year-old civilization that now wants to turn outward and assimilate most of the world.

China’s top-down structure is capable of unspeakable cruelty on a grand scale. It has nothing to do with Marxism. As I report in my new book, You Will Be Assimilated,

All of China’s governments have been cruel in a way that boggles the Western imagination. Chiang Kai-Shek’s Kuomintang founded the democratic government of Taiwan under American tutelage after the Communist Revolution of 1949, but in war it displayed a ruthlessness unmatched in Western history. In June 1938, as the Japanese Army approached the city of Wuhan in Henan Province, Chiang ordered his generals to blow up the dikes containing the Yellow River near Huayuankou, hoping to slow the Japanese advance. Chiang knew that the resulting deluge would flood a region inhabited by twelve million of his own citizens. Nearly nine hundred thousand Chinese drowned. This was “the largest act of environmental warfare in history” and the most wanton in disregard for human life. The flood disrupted Henan province’s irrigation network, and a further two to three million Chinese died in the consequent Henan famine of 1942–1943.

And that’s the good guys. The bad guys are worse. Mao starved between 18 and 45 million people in the Great Leap Forward of the 1950s. China’s founder Qin Shi Huang (the Dragon Emperor in the “Mummy” sequel) reportedly buried the bodies of a million workers in the Great Wall.

This has nothing to do with Marxism. There are fewer Marxists in China than in Cambridge, Massachusetts. China has been governed by a Mandarin caste selected by standardized exams for more than 2,000 years, and the Communist Party is merely today’s name for the new Mandarin bureaucracy. William F. Buckley said that he would rather be governed by the first 100 names in the Boston telephone directory than by the faculty of Harvard. China’s ruling caste is more like a government of National Merit Scholars. The Chinese look with contempt on a democracy that allows us to elect stupid leaders if we so desire.

Chinese civilization is 5,000 years old. Why has it lasted so long? You haven’t run into any Hittites, Sumerians, or Romans of late. Every time China collapsed it reconstituted itself on the same model. Foreign invaders became emperors and found there was only one way to run the place. So they assimilated and Chinese civilization prevailed. I explain in my book:

The geography of the great Chinese flood plains required a central government capable of undertaking massive water management projects. Chinese civil engineering was the wonder of the ancient world. Sichuan Province became the breadbasket of China and a byword for wealth after the Qin Dynasty split the waters of the Min River (Minjiang) at Dujiangyan, near the modern metropolis of Chengdu. The Qin official Li Bing built an artificial island in 256 B.C.E. to divert the spring floodwaters that frequently devastated the Sichuan plain, and cut a channel through the living rock of a mountain to divert the excess water into canals that still irrigate two thousand square miles of fertile ground. The Dujiangyan hydraulic system has remained in continuous use for nearly two and half millennia, and is one of southwest China’s great tourist attractions as a UNESCO World Heritage Site….We do not know how ancient Chinese engineers solved the problem, but the result is one of the great technological achievements of the ancient world, unparalleled in India, Mesopotamia, or Egypt—the other great riparian civilizations….Then as now, the Chinese accepted hardship and even cruelty on behalf of collective need. Then, as now, Chinese leaders planned over a horizon of several generations.

If you are a freedom-loving dissident in China, you’re likely to end up as a kidney donor. The Chinese state is utterly ruthless. But there isn’t a lot of dissent in China. The Chinese view the state as a necessary evil, and the emperor as a sort of capo di tutti capi, the boss whose job is to prevent the underbosses from killing each other. If you can imagine the Sicilian mafia merged with Bechtel, and run by National Merit Scholars, you have a rough idea of what China is like. China has between 120 and 148 citizens in jail per 100,000, depending on which human rights organization estimate you use; the United States has 665 people in jail per 100,000. There is little police presence on the streets of Chinese cities, but the spy cameras are spaced 100 meters apart, while Big Brother monitors the position of every smartphone in the country.

A lot of Americans have a warm-and-fuzzy illusion that the Chinese people would embrace American-style democracy if it weren’t for the nasty ChiComs in power. That’s the same kind of thinking that got us into endless wars in the Middle East. For 5,000 years the Chinese have known only one kind of system, except for periods of chaos with unspeakable suffering. There is a way to change China, and that is to show that our system is better. But China is gaining on us. Restrictions on China’s use of American technology will slow China only temporarily. Huawei can’t buy computer chips made with American equipment, but it can hire anyone it wants. By some estimates, a fifth of Taiwan’s chip engineers are now working on China’s mainland for double pay, in a crash program to build China’s domestic chip industry.

We’re not going to beat China by complaining about how nasty it is. We’re not going to stop China’s tech juggernaut with restrictions on the use of our technology–no country in history has ever stopped a challenger that way. We’re not going to war with China, which has enough surface-to-ship missiles, satellite-killer missiles, and quiet submarines to keep American ships away from its coast. We can only innovate faster than China does. And as long as China outspends us 10:1 in game-changing technologies, we’re not going to do that. It will take ten years and $1 trillion to turn this around (a third of what the Federal Reserve spent this year to bail out financial markets). JFK did it, Reagan did it, and we can do it. But time is getting short.