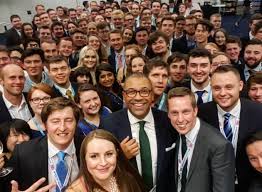 Earlier this week on Tuesday, Hayden Williams, a young man who’s affiliated with the conservative youth organization Turning Point USA, was viciously attacked by a rabid leftist who disapproved of the signs that were set up around the organization’s recruitment table.

The politically motivated attack was caught on video, at first by Williams himself before the two attackers knocked it from his hands, and later by onlookers. Video footage shows the man who attacked Williams shouting, “Motherf*cker. You racist little inbred b*tch. C*nt. I’ll shoot you!”

Police reported that one of the two men knocked over the table, and then punched Williams in the face several times, inflicting noteworthy injuries.

The two suspects had left the scene by the time campus police arrived.

Witnesses of the attack have told members from the media that signs at the recruitment table read: ‘We Support Our President’, ‘This is MAGA Country’, and ‘Hate Crime Hoaxes Hurt Real Victims’, a reference to Empire actor Jessie Smollet’s staged racist and homophobic attack against himself last month in Chicago.

In an interview with Campus Reform, Williams said, “Some students nearby tabling were laughing, even one guy was smiling while I was being attacked and trying to hand me his flyer as a joke. The idea is free speech has consequences…. which include you getting assaulted if they find you promoting ideas others don’t agree with.”

The incident has garnered attention from several prominent conservative figures.

In a tweet, Donold Trump Jr. wrote, “When a liberal like Jussie cries wolf and fakes an attack he receives unmatched coverage, sympathy & support creating a tsunami of attention. When a conservative student literally gets punched in the face and it’s caught on video it barely makes a ripple.”

Senator Rand Paul, a Republican from Kentucky, wrote, “’This is abhorrent behavior against free speech on campus. No form of violence is acceptable.”

Conservative groups across the country have claimed for a long time now that students who lean to the right side of the political spectrum have repeatedly been targets for harassment and violent assault by leftists over the views that they hold. In an interview given to Fox News, Charlie Kirk, the founder and executive director of Turning Point USA stated that, “ College campuses have become increasingly unsafe for conservatives.”

The incident is just the most recent in a series violent, ideologically inspired attacks against conservatives on college campuses across the United States.

Campus police are currently investing that assault and are asking the public for information on the perpetrators.

During the run-up to the 2020 elections, look for political violence and the hate campaign against conservative Americans to reach levels that have never been seen before.