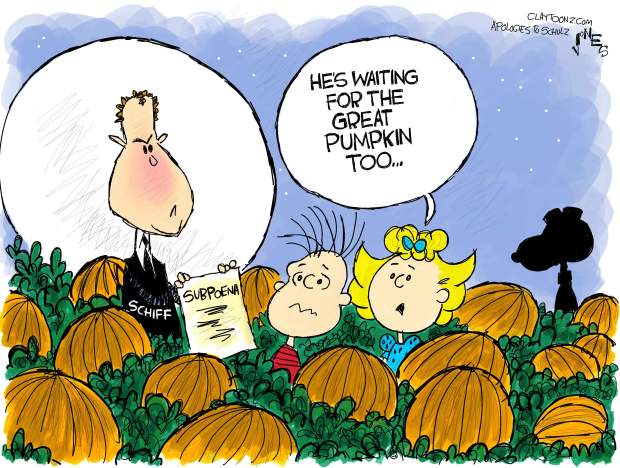 Will Trump testify in the impeachment ‘inquiry?’

In order to create a press release issue that would give her a few minutes of face time in front of the camera, House Speaker Nancy Pelosi invited President Trump to be a witness.

Kneejerk reaction has been that Trump would never even consider such a proposal.  It is unprecedented and arguably risky.  Pelosi even suggested that Trump could respond to questions in writing.  This invitation my have been more palpable if House Democrats had not just opened yet ANOTHER investigation – this time arguing that Trump had lied – perjured himself – in one of his written responses in the investigation by Special Counsel Mueller.

In that case, Trump said he did not recall any conversation with former advisor Roger Stone regarding Wikileaks.  Since Trump said he could not recall, it is extremely unlikely that a perjury charge could be pursued in a court-of-law – but, of course, such concocted “crimes” can be played out in a non-judicial impeachment process.

Still, I told friends not to be too convinced that the invitation would be rejected.  After all, this is Donald Trump.  He loves a good fight – maybe too much so.

Whether he was sincere or not, Trump has indicated an interest in testifying on his own behalf.  He has not revealed if that would be in person or in writing.  Obviously, the latter would be less risky, but a personal appearance would be a YUGE media show – and we know how he loves a YUGE media show.

If Trump decided he wanted to testify in person and he asked my advice – which he never has – I would tell him to NOT testify under oath –explaining that he knows any misstatement or lack of recollection would be elevated to a republic-destroying statement and be included in the Democrat’s hypothetical Articles of Impeachment.

He could point out that every Democrat on that committee has been lying with impunity.  But since they are not under oath and actually have immunity from the laws of slander and libel (so much for no man is above the law), there is no reason why he should testify under oath.

Most observers speculate that Trump will not testify – and I suspect they are correct.  But what a show it would be.