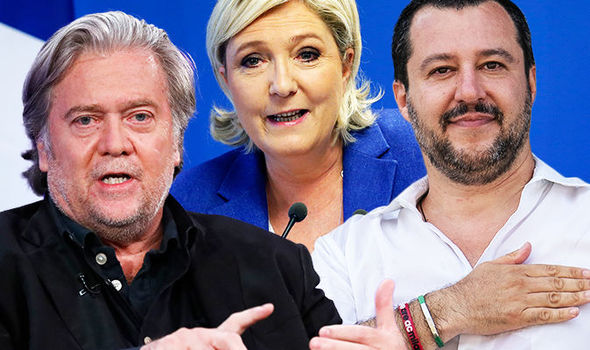 Will The EU Go Right?

The ECFR is a pan-European think tank with offices in seven European capitals. It’s recently published report suggests that populist Euroskeptic parties will win at least a third or more of the total seats in the European Parliament.

The parliament’s projections, which are based on some national polls which were assessed by Kantar Public, a data research firm and consultancy, are slightly different. These projections suggest that the same parties are on track to hold about a fifth of the seats in the European Parliament after elections in May.

The ECFR’s report says that the elections could “see a group of nationalist anti-European political parties that advocate a return to a ‘Europe of the nations’ win a controlling share of seats in the European Parliament.”

The irony of the globalist led pan-European think-tank using the word ‘anti-European political parties’ is that they’re of course referring to what an ever increasing number of Europeans would surely think of as pro-European parties who stand for the rights and interests of everyday native-born European people. Parties like Lega in Italy, National Rally in France, Fidesz in Hungary, Law & Justice in Poland, and others cut from the same cloth are the parties that ECFR is specifically referring to.

The ascent of these parties like these could ‘undermine and cause irreparable damage to areas such as trade, security, and defense’ the report states.

Voters from the UK will not be participating due to their scheduled exit from the union on March 29th. The new 2019 parliament will be composed of a total of 705 seats, down from its current 751 positions due to UK’s planned exit from the 28-nation bloc.

European parliament spokesman, Jaume Duche Guillot has said that this election represents ‘one of the biggest democratic exercises anywhere in the world,’ with 373 million citizens from 27 different European countries having a chance to vote.

The new parliament will be tasked with formulating new EU legislation over the next five years as well as choosing the successor to the current head of the European Commission, Jean-Claude Juncker.

According to the parliament’s projections based off of Kantar Public’s research, national populist Euroskeptic parties are predicted to occupy 153 seats of the 705-seat parliament. Italian Deputy Prime Minister Matteo Salvini’s Lega is poised to become the parliament’s second largest national party with 27 total seats after Germany’s Christian Democratic Union (CDU), who currently controls 29 seats. France’s National Rally party headed by Marine Le Pen is also expected to make significant gains. Italy’s Lega and France’s National Rally both belong to the Europe of Nations and Freedom (ENF) group, a right-wing populist and Euroskeptic alliance which also includes parties like the Dutch Party of Freedom and Austria’s Freedom Party. After May’s election, the total number of seats occupied by the ENF group inside of the EU legislator is expected to increase from 37 to 59.

The European People’s Party (EPP) is considered the bloc’s center-right conservative group, but also has MEPs from Hungary’s right-wing populist Fidesz party. The EPP is expected to remain the largest voting bloc inside of the European Parliament.

So, depending on the source, be it the European Council on Foreign Relations (ECFR) or the European Parliament itself, after May’s elections national populist and Euroskeptic forces hold anywhere from 1/5 to over 1/3 of the new parliament’s seats.

For the people of Europe, this is excellent news. As for the anti-European, technocratic globalist elite in Brussels, you can bet that they’re more than disappointed with these latest projections as this alliance of national populist parties could cause irreparable damage to neoliberal internationalists on the continent.