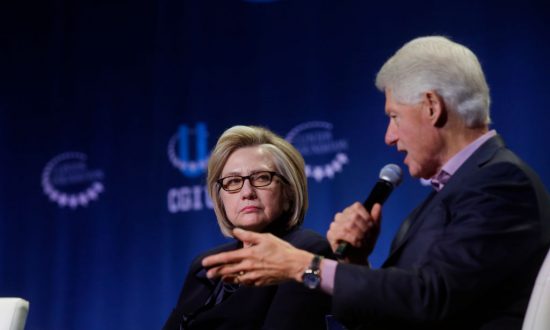 Who Cares About the Clintons?

As the Holidays approach, and visions of sugar plum fairies, school breaks and vacations are on everybody’s mind, there are plenty of “hot tickets” to go around. There are Broadway shows like Hamilton, rock concerts like the recently announced Rolling Stones tour, and of course movie tickets to the cinematic blockbusters that tend to be released over the Holidays.

But, one ticket that isn’t exactly selling like hot cakes, is to Bill and Hillary Clinton’s “whirlwind” speaking tour. The first few dates of the tour had dismal sales, and now, according to Fox News, tickets to nine of the remaining dates have showed up on Groupon at “deeply discounted” prices!

According to reports, at the first stop in Toronto there were many noticeably empty seats. The second stop of the tour, scheduled for Houston, had to be delayed due to the death of President H.W. Bush, probably saving the Clinton’s further embarrassment.

Even in deeply blue territory, there does not seem to be much interest in what the Clintons have to say. Some of the deepest discounted ticket sales are offered in New York, Boston, and Philadelphia

A Bargain to Be had?

The Groupon deals seem to have worked, and Fox reported that tickets to a May 4 appearance in Inglewood, Calif., that were normally priced $77 and reduced to $35, quickly sold out. Perhaps they were bought up by Santa who wants to leave them for nasty boys and girls instead of lumps of coal!

Third-party ticket sellers have listed “An Evening With the Clintons” tickets for as low as $7.

You can’t just chalk it up to democratic apathy. The disinterest in the Clinton tour stands in stark contrast to Michelle Obama’s Becoming book tour, which has sold out venues and drawn the former first lady reams of positive media attention. Ticket packages for Obama’s tour have sold for as much as $3,000.