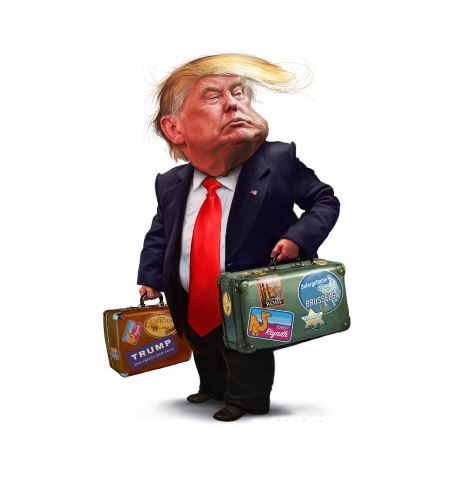 Using an analogy from President Trump’s favorite game of golf, he is one short putt from being the former President of the United States.  Though the press refused to believe or report his statements about leaving office in a peaceful manner, he is pretty much doing that – not withstanding his propensity for provocative rhetoric.

After losing his last constitutional option, Trump reaffirmed his intention to leave the office peacefully.  Nothing Trump did to try to officially overturn the election was illegal or unconstitutional. Foolish perhaps – but not criminal.  Some of it most certainly seems exercises in futility, but well within his rights to try.

With only a few days left in his presidency, one might expect the hardcore Trump-hating resistance movement to sit back in smug satisfaction and let the clock run out.  But no, no, no.

Their latest political insanity is to try to have Trump removed from office before January 20th.  There are only two ways that could conceivably be accomplished.  They can impeach him in the House and convict him in the Senate.  But … even with their control of the Senate, Democrats are extremely unlikely to get that done in a matter of days.

The other option is to have the President’s Cabinet and the Vice President of the United States invoke the 25th Amendment by having Trump declared mentally impaired and unable to fulfill his term in office.

Trump’s critics claim that he is deranged, and likely to use his power in these final days to  … to … to do what?

To put some putrid flesh on their ridiculous scenarios, they ominously note that Trump still has “his finger on the nuclear button.”  They are really not that stupid, but they are dishonest enough to fool the people into believing that Trump has the ability to arbitrarily launch nuclear weapons.  That is not the case – and never has been.  Launching a nuclear weapon is an intentionally complex procedure designed to prevent one person from launching an atomic missile.  It takes a coordinated effort by the President, the Pentagon and commanders in the field – anyone of whom can prevent a launch.  There is absolutely no indication that Trump would even consider such an action.

They also advance a comic theory that Trump might use the military to seize the Oval Office after January 20th in a classic coup attempt. There is not a single military command person who would obey such an unconstitutional and illegal order – and Trump has shown neither the desire nor any indication for such an action.

They worry about Trump using the pardon power on behalf of family, friends and allies.  If he did, he would only be following in a well-established tradition.  They suggest he might create a constitutional issue (note, I did not say crisis) by pardoning himself.  That would likely land in the Supreme Court to decide.  It would be great political theater, but not much real damage to the Republic one way or the other.

Or … he could step aside and have a deal to have President Pence pardon him before they both leave office.  Of course, that plan is dead on arrival because Pence would not even entertain it.

Some postulate that Trump could issue all kinds of terrible Executive Orders.  Even if he were inclined to do so – and I doubt that he is – President Biden would reverse them on day one of the new administration.  Just more grist for the Washington gossip mill and more fodder for the Trump-haters, but not much lasting impact.

Even with the level of the anti-Trump bias in the elitist media — and the complete descent down the rabbit hole of nutty theories designed to incite public fear and hatred against Trump — and all those are not willing to join the political vigilante lynch mob – removing Trump from office is a dead-on-arrival story.  In fact, it is not a story at all.

But that reality did not stop the old Watergate reporter Carl Bernstein from advancing the nuttiest and most dangerous suggestion of all.  He opines that the Cabinet and Vice President Pence agree (conspire) to only follow directives from Pence – essentially block Trump from the powers of the presidency.  So … in a totally illegal and unconstitutional manner, the Vice President of the United States would seize the powers of the presidency for the remaining days in what could only be described as a palace coup.  With that sort of idea, we should be concerned about Bernstein’s mental cognitively.

President-elect Biden often says, “we are better than this.”  The media that admires him to the point of beatification should set the example for his claim.  They should be better than that.