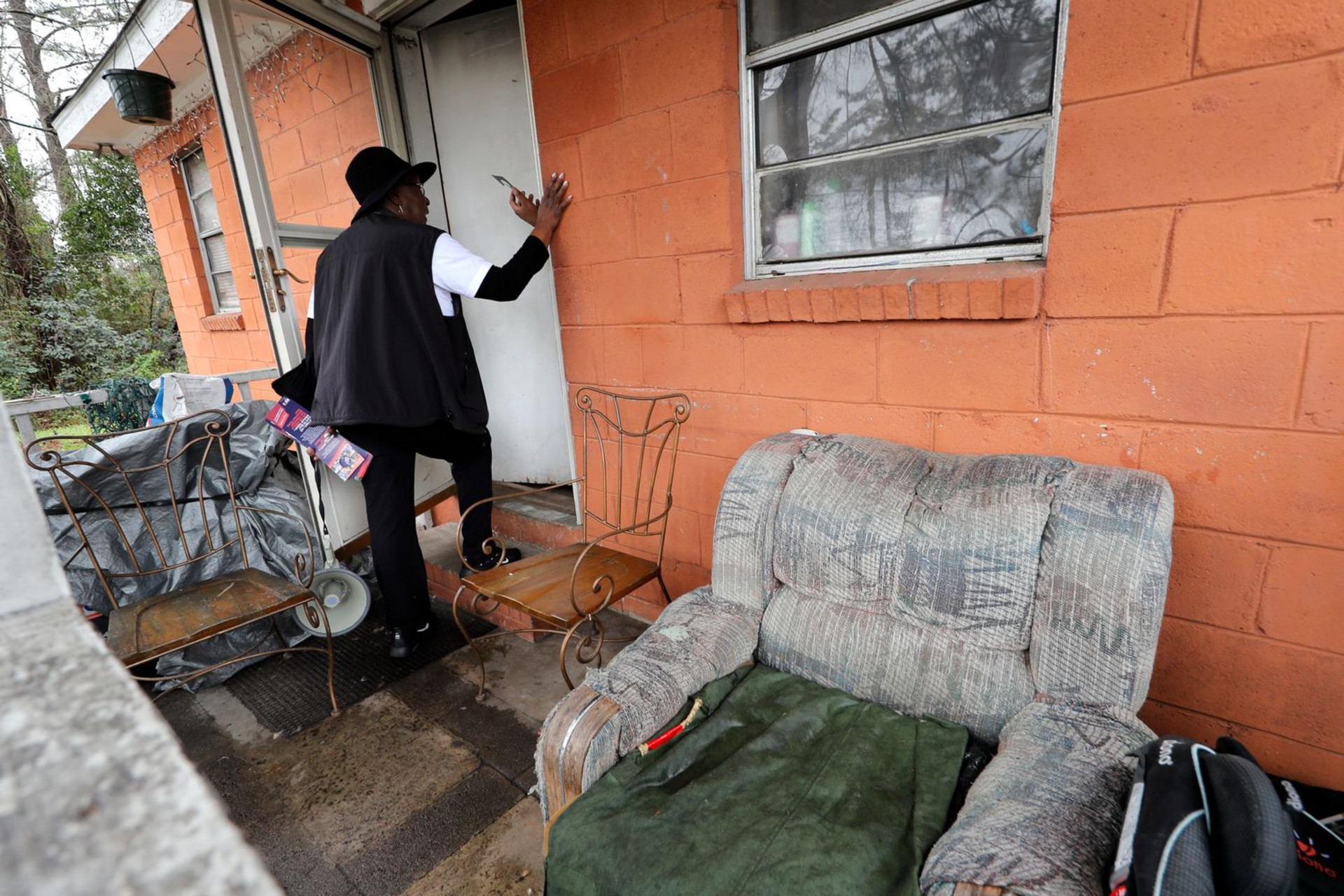 Trump’s campaign knocks on a million doors a week. Biden’s knocks on zero.

Donald Trump’s campaign says it knocked on over 1 million doors in the past week alone.

The Republican and Democratic parties — from the presidential candidates on down — are taking polar opposite approaches to door-to-door canvassing this fall. The competing bets on the value of face-to-face campaigning during a pandemic has no modern precedent, making it a potential wild card in November, especially in close races.

Biden and the Democratic National Committee aren’t sending volunteers or staffers to talk with voters at home, and don’t anticipate doing anything more than dropping off literature unless the crisis abates. The campaign and the Democratic National Committee think they can compensate for the lack of in-person canvassing with phone calls, texts, new forms of digital organizing, and virtual meet-ups with voters.

“At first I was nervous, but our response rates on phone calls and texts are much higher and people are not necessarily wanting someone to go up to their door right now,” said Jenn Ridder, Biden’s national states director. “You get to throw a lot of the rule book out the window and try out new things.”

Trump and the Republican National Committee, in contrast, started deploying mask-wearing field staffers and volunteers to the streets in June. The GOP quickly ramped up and now claims more than a million doors a week despite Covid-19 surges across the country, including in swing states like Arizona.

Republicans say their door-knocking dominance could make a difference in November, since in-person conversations have long been considered the most effective type of voter contact.

“From now to Election Day, voters may only see one campaign at their doors,” Elliott Echols, the RNC’s national field director. “If this were Barack Obama running, Democrats would want to be out there knocking doors. They don’t have enthusiasm or a strong field operation, so it is a convenient excuse. We can do this safely for President Trump and Republicans up and down the ballot.”

Both campaigns are funneling millions of dollars into their field programs. Trump Victory has over 1,500 full-time staffers across 23 states, and it has required staffers to read “Groundbreakers: How Obama’s 2.2 Million Volunteers Transformed Campaigning in America,” a close look at Obama’s 2008 and 2012 ground games. The RNC says they will add an additional 1,000 people by the end of September to focus on doors and get out the vote.

Biden’s organizing program was slow to ramp up after the primary. Senior leadership for critical states like Florida and Pennsylvania were announced only in July and the campaign set a goal of just 600 hires by the end of June. The Biden campaign, however, told POLITICO it will have over 2,000 battleground staffers by the end of August through a coordinated committee with the DNC.

Political scientists disagree on the extent to which organizing programs matter, but it’s broadly acknowledged that they can sway a close race and that they are particularly effective in turning out base voters. Operatives say such organizing could be even more important than usual this fall because of the surge in mail-in ballots.

Reminding voters to fill out their ballot and then collecting them — or “ballot catching,” as some field organizers call it — is one of the most critical programs on any campaign, although laws on it vary by state. Biden campaign staffers said they likely would not do in-person ballot collection but expressed optimism that they could deploy an effective program regardless through phone and text, pointing to their successful efforts in Wisconsin this spring in a state Supreme Court race.

The decision to forgo door-knocking is part of a larger gamble that voters will give Biden credit for taking the coronavirus more seriously than Trump. The strategy has extended to Biden’s own activities: He’s been mocked by Trump for campaigning from his basement, though Biden has ventured out to more public events lately. The campaign’s Philadelphia headquarters is mostly empty, and many new hires are working remotely.

Trump and his campaign have been far less restrained, betting that voters won’t be turned off by campaign workers ringing their doorbells. Officials report to work at Trump campaign headquarters in suburban Washington, D.C., where some have said they feel peer pressure not to wear masks.

Some Democratic operatives believe that Biden’s shift to phone and digital will end up redounding to his benefit.

“Politics is the last remaining marketing entity — which essentially is what a campaign is — that utilizes door knocking as a technique,” said Michael Halle, a former senior adviser to Pete Buttigieg’s presidential campaign. “The Trump approach of measuring door knocks is very antiquated and I think the Biden campaign may be following that model if they hadn’t been forced to think differently because they’re acting responsibly in a pandemic.”

The RNC declined to say whether any field staffers or volunteers have tested positive for Covid-19 but said every staff member is provided an eight-page document of health protocols including CDC guidance. The committee said it provides canvassers with masks and encourages them to take a few steps back after knocking on doors. A spokesperson added that the committee has spent over $100,000 on PPE and office cleaning.

“I think it’s possible to do it in a responsible way, preferably not in a state where trends are going the wrong way,” said Dr. Howard Koh, the former assistant secretary for Health during the Obama administration. “If somebody is outside and stays outside and stands 6 feet away and masks are mandatory—not optional—plus has gloves and hand sanitizer, I think those are acceptable guidelines to follow.” Still, he added, “Canvassing can be done virtually and that’s the best option in a time like this.”

The partisan divide over in-person campaigning is a manifestation of the deeper political divisions that have scrambled America’s response to the public health crisis. Republicans are less supportive of mask mandates and have felt more comfortable going to public places like restaurants and salons than Democrats, according to polls.

Many Republican lawmakers rallied behind small-business owners who have broken lockdown orders. Some Democratic governors and lawmakers have been much stricter about lockdowns and mask mandates, while Republicans have argued that some of the measures are creating more problems than the disease.

That divide may make it impossible for Democratic campaigns to deploy door-knockers even if they want to. Progressive Turnout Project, a deep-pocketed liberal super PAC that hired hundreds of field staffers to knock on doors in competitive states this year, began sending canvassers back into the field earlier this summer. The group soon faced a public resignation, a staffer who tested positive for Covid-19, and a revolt from lower-level employees over safety, as McClatchy first reported.

Last week, the group suspended all door-to-door canvassing and said their staffers — approximately 1,200 across 17 states — would focus on phone calls, texting and “relational organizing.”

Alex Morgan, the group’s executive director, declined to be interviewed. Asked whether he’s worried that Democrats could be at a disadvantage, he said through a spokesperson that “we hope that the coronavirus situation improves enough for progressives to return to the doors this cycle, but safety comes first.”