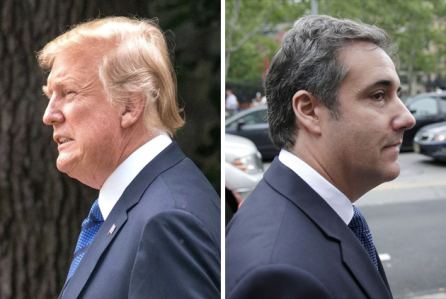 The big liberal news of the week is the existence of a taped phone conversation between Michael Cohen – the taper – and President Trump – the tapee. It is said to reveal that they had a brief chat regarding Karen McDougal, another gold digger who claims to have had an affair with President Trump.

In typical elitist media fashion, the story first appeared on the pages of the New York Times. The column and the columnist, Michael Schmidt, was subsequently hyped hour-after-hour on every program on CNN and MSNBC. Even though no one had actually heard what is on the tape, a seemingly endless series of those panels of parroting pundits offered their opinions and perspectives of what was on the tape they never heard.

What was described as a shocking revelation was hardly shocking at all. For weeks, we had heard that Special Counsel Robert Mueller had seized recorded phone conversations from Cohen’s office, apartment or storage locker – and that some of those tapes included conversations with Trump.

What was new, however, was the revelation of the subject matter. As the story goes, Cohen suggested that they buy the rights to McDougal’s story of the alleged assignation with Trump. Those rights were currently held by American Media, Inc. (AMI), the holding company for the National Enquirer.

According to the rumor – which CNN, MSNBC and the rest of the liberal media treat as hard news — AMI purchased the rights for $150,000 not to publish the salacious story – but to bury it as a favor to Trump. The media further theorizes that Cohen suggested that Trump purchase the rights from AMI to keep control of the story in his own hands.

It is about this time that the #NeverTrump media goes into their favorite tactic: sinister interpretations. In unison, the liberal media claims that former White House Communications Director Hope Hicks lied – not misspoke – when she said that “we” had no knowledge of any payoffs. The reporters claimed – assumed – that the “we” referred to Trump. But, it is equally plausible that the “we” referred to the White House or campaign staffs. In that case, what Hicks said would have been very true. And if she said that she did not know of any payoffs, that would be accurate since there was no payoff.

As more substance leaked out, we learned that Trump said any payment should be done by check, not cash, so there would be a record. That is not the request of a man attempting to conceal the transaction. But even more important, Trump vetoed the payment. How do we know this? Because Cohen recommended the payment and the payment was not made. So, who stopped it?

The fact that there was no payment made totally refutes the media reports that there might be, could be … no … even that there was a violation of federal election laws. No matter how forcefully the media advanced that bogus theory, election law violations are determined by the Federal Election Commission, not the press and pundits. And while the press reports as if it was a major Class A felony – in most cases, it is merely a civil infraction settled by a fine.

So, what is the big story that dominates the news day-after-day? If you boil it all down, it is possible that Trump lied – although not under oath – about having an affair with McDougal — or more accurately lied about not having that affair. The affair allegation might have more credibility if he had paid her off – and even then, it is plausible such a hypothetical payoff would have been to end a false allegation. That is not unheard of.

So, let us assume the worse. Trump did have that affair and lied about it – but refused to spend a nickel to take control of the rights to McDougal’s story. So, where is the crime? Where is the shocking new information? It seems that the press has been adding a lot of filler to an overcooked nothing burger.

The question as to whether Trump is a person of high moral character or not is no longer controversial. He is not. So, nothing about this latest “breaking news” is new or relevant.

There may be more revelations to come – and it would be surprising if there were not. But in terms of the reporting of the yet unheard tape of this one Trump/Cohen phone conversation, we see another event hyped beyond reality and relevancy for no other reason than to bring down President Trump.