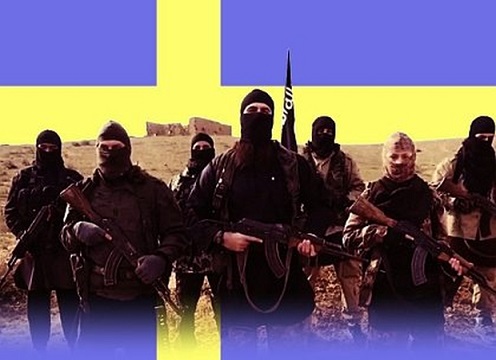 Syrian Hospitalized In Sweden Before Returning To Fight For ISIS

Sweden’s grossly incompetent leftist-globalist government has allowed an ISIS fighter to return to the country to receive medical treatment from the Swedish state for an injury he received in Syria. If that wasn’t bad enough, they then allowed him to return to Syria to continue fighting for the ISIS terrorist organization.

Khaled Shahadeh, a former resident of Gothenburg and ISIS terrorist, has reportedly bragged about receiving medical treatment from the Swedish state after he was badly wounded in a clash with the Syrian military in 2014.

From a prison inside of Kurdish-held territory, 29-year-old Shahadeh told a crew from the Kurdish media outfit ReProduction, “They fixed the nerves. I recovered. Got married and returned here with my wife,” Expressen reports.

During the interview, Shahadeh goes on to say that when he returned “home”, he was greeted at the airport by staff from the Swedish Security Police SÄPO.

“They were a little worried about why I returned to Sweden,” Shahadeh continued

“They immediately started asking questions about why I returned and what I would do in Sweden. They made it clear from the start that I had not done anything that violated the law. They said there was no law that says I should not join al-Dawla or do jihad,” Sahadeh claimed.

In 2015, Shahadeh returned to the Islamic State in Syria. He’s admitted to witnessing mass executions of prisoners.

“Some prisoners were executed, others had their heads cut off. It’s the worst thing I’ve ever seen with my own eyes,” he said.

Shahadeh remained fighting alongside ISIS terrorists until the final battle in Baghouz during the spring of 2019 when he fled and ended up in the hands of the Kurds.

Once again, he’s banking on the sheer stupidity of the Swedish state to allow him back in.

“I want to ask for all the people forgiveness, not just my family. If Sweden wants to help us, let them help do it. We are grateful if Sweden helps us out of here,” Shahadeh concluded.