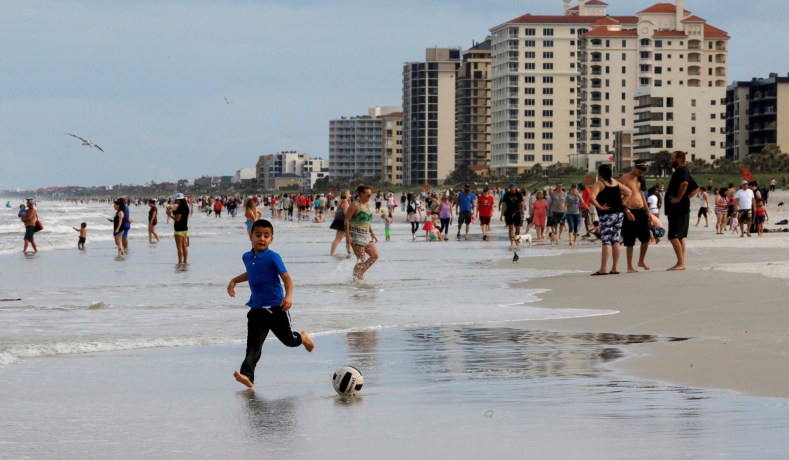 Forgive Jacksonville, Fla., for it has sinned.

The largest city in Florida partly reopened its beaches, and it became something of a national scandal. CNN ran a disapproving segment, and the hashtag #FloridaMorons trended on Twitter.

As the CNN report put it: “The scene at Jacksonville Beach wasn’t one of caution in the middle of a worldwide pandemic. Crowds cheered and flooded the beach when police took the barriers down. People were seen swimming, biking, surfing, running and fishing.”

Surfers and bikers are the least of our worries. Yet, there is a segment of American opinion that takes it as its responsibility to scold and shame anyone who dares go out and get a little fresh air.

Early on in the crisis, CNN anchors spent 20 minutes inveighing against people walking, running, biking, and Rollerblading along San Francisco’s Embarcadero. Noting that some people were holding hands, Jake Tapper called it “enraging.” Of course, random strangers don’t hold hands, but people who are likely in close proximity whether they are enjoying a stroll or not.

Despite there being no indication that outdoor spaces abet the spread of the disease, parks have been shut down throughout the United States, and the closures are at times enforced with rigor. No less than Tom Brady was chased from a closed Tampa Bay park after he was discovered working out, apparently alone. A father in Colorado was briefly detained by police for the alleged offense of playing T-ball with his 6-year-old daughter on a softball field.

A sure sign of fanaticism is the inability to make distinctions, in this instance between risky and non-risky activities and between places hard hit and places not. It’s one thing to hold a day-long, 100-person family reunion in a public park, quite another to jog through one. It’s one thing to begin opening up in New York City, where there have been more than 10,000 deaths, and another to begin opening in Montana, where there have been 14.

Jacksonville, Fla., is the seat of Duval County. With a population of nearly a million people, the county has had 17 COVID-19 deaths. It is hardly a hot spot.

At least some of the spleen would be taken out of the coronavirus debate if people acknowledged that we live in a vast continental country, with radically different ways of life from one end of it to another. Not only are not all states the same, not all counties within states are the same.

Anti-lockdown protests at the Michigan state capitol last week got a lot of attention (and a lot of criticism for, yes, lack of social distancing because some protesters milled about on the capitol grounds). One argument of the demonstrators is that Michigan shouldn’t be uniformly locked down if conditions around the state aren’t uniform.

Sparsely populated Alcona County in northern Michigan has four cases and no deaths, according to the latest state data. Wayne County, encompassing the city of Detroit, has 6,677 cases and 597 deaths. One of these things is not like the other.

But such is the lockdown zealotry that any thought that these kinds of places should be treated differently is considered heresy sure to get people killed. It seems indisputable that the lockdowns have slowed the spread of the disease, but at an enormous economic cost. We are going to have to show some flexibility and be willing to adopt a patchwork approach to opening up around the country.

We can’t be beholden to public officials and commentators who, to paraphrase H. L. Mencken, have the haunting fear that someone, somewhere, may be Rollerblading.