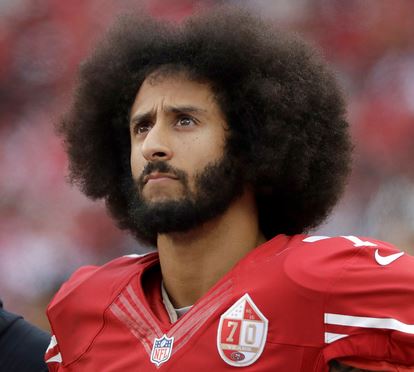 Takeo Spikes, former San Francisco 49ers linebacker, says that Colin Kaepernick should have his own statue in the historical Smithsonian museum.

“I truly believe that he deserves some type of monument, a statue in the Smithsonian in D.C,” Spikes said, speaking to NBC Sports Bay Area on Monday.

“The reason why I say this is because this man put everything on the line,” he continued. Colin Kaepernick is responsible for initiating the social justice protests during the national anthem at sporting events during the 2016 NFL season.

Kaepernick, the former 49er second-string quarterback, became a free agent in 2017. He then immediately turned down a 49ers contract. No team has signed him since, and many people claim that he has been blackballed from the league.

“But I applaud him simply because he decided to take a stand,” Spikes said. “He decided to draw a line in the sand and say look, ‘I can make the money, I can live a carefree life for the most part and get paid handsomely and never say a thing because I’m not affected.’

“But he took time to look back and really just see the big picture, the spectrum when we talk about the inequalities. He decided to not only call it out but take a stand for it,” Spikes added.

Kaepernick maintains that he has been blackballed from the league. Despite claims that the NFL has conspired to keep him off the field, the league dedicated a special workout day to Kaepernick in 2019. He refused to participate and arranged his own workout day, which a few teams attended.

24 thoughts on “Should Colin Kaepernick Get a Statue in the Smithsonian?”