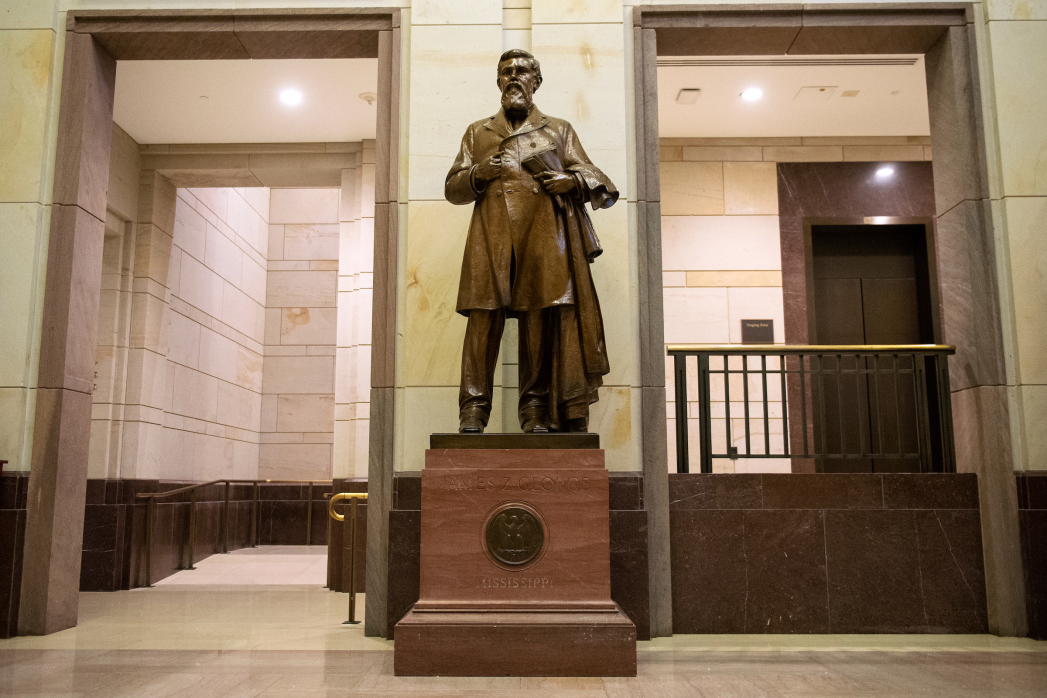 Speaker Nancy Pelosi is calling for the removal of 11 Confederate statues from the Capitol’s National Statuary Hall Collection.

In a letter sent on Wednesday, Pelosi asked the Joint Committee on the Library — led by Senate Rules and Administration Chairman Roy Blunt, a Missouri Republican, and House Administration Chairwoman Zoe Lofgren, a California Democrat — to direct the Architect of the Capitol to remove the statues of soldiers and officials who represent the Confederacy.

Pelosi specifically mentioned two prominent Confederates — Jefferson Davis and Alexander Stephens — who served as president and vice president of the Confederate States of America, respectively, and who were charged with treason against the United States. Stephens’ statue was given by Georgia and Davis’ by Mississippi.

“While I believe it is imperative that we never forget our history lest we repeat it, I also believe that there is no room for celebrating the violent bigotry of the men of the Confederacy in the hallowed halls of the United States Capitol or in places of honor across the country,” Pelosi wrote.

The request comes as the nation grapples with the prevalence of police killings of black people, including the death of George Floyd. The request also came on the day President Donald Trump said he would not consider renaming any military bases that derive from Confederate figures.

Adding to the context, NASCAR, the stock car-racing league born in the South, announced it was banning the Confederate battle flag from its events.

Congress authorized the National Statuary Hall Collection in 1864 to allow each state to donate two statues of notable citizens “illustrious for their historic renown or for distinguished civic or military services” for display in the Capitol.

Lofgren said she agrees the Joint Committee and the Architect of the Capitol should quickly remove the Confederate statues.

“I stand ready, and call on the Chair of the Joint Committee to swiftly approve the removal of these statues,” she said in a statement. “The Capitol building belongs to the American people and cannot serve as a place of honor for the hatred and racism that tears at the fabric of our nation, the very poison that these statues embody.”

Mississippi is the only state with two Confederates in the collection: Jefferson Davis and James Z. George. Neither was born in Mississippi.

George was a Confederate colonel who became a U.S. senator and chaired Mississippi’s Democratic Executive Committee from 1875 to 1876, crafting the “Mississippi Plan,” a campaign of voter intimidation and violent repression.

George led the construction of Mississippi’s 1890 Constitution, which effectively reduced the number of qualified black Mississippi voters from 147,205 to 8,615, an action that resulted in a white electoral majority in every county, according to a 2017 report by the University of Mississippi Chancellor’s Advisory Committee on History and Context.

South Carolina is represented by Wade Hampton, a Confederate, and John C. Calhoun. Calhoun died before the inception of the Confederacy, but would have likely been a supporter of it.

States can ask the Joint Committee on the Library of Congress to approve a replacement — if the request has first been backed by a resolution adopted by the state’s legislature and governor.

The statue up for replacement must have been displayed in the Capitol for at least 10 years; however, the committee can waive the requirement for cause at a state’s request.