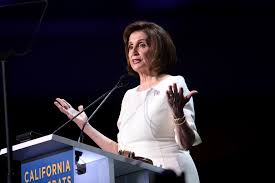 Democrat Speaker of the House Nancy Pelosi said that she would work with Senate Majority Leader Mitch McConnell to pass a smaller coronavirus relief package. After months of unwillingness to agree, she said she is now willing to accept a smaller deal “because we have a new president.”

“What shifted in your opinion when the Problem Solvers Caucus had a much larger bill a few months ago?” a reporter asked Pelosi. “You did not like that piece of legislation. What has shifted now when they’re on board with this piece that’s come out in the Senate?”

“Perhaps you missed what I said earlier. Joe Biden committed to ending and crushing the virus and had a build better America initiative, build back better,” Pelosi replied. “A vaccine, answer to our prayers. An answer to our prayers of 95% effectiveness in terms of Pfizer and Moderna and there maybe others coming forward. That is a total game changer, a new president and a vaccine.”

“This has simplicity. It’s what we’ve had in our bills,” she said. “It’s for a shorter period of time, but that’s okay now, because we have a new president. A president who recognizes that we need to depend on science to stop the virus. A president who understands that America’s working families need to have money in their pockets in a way that takes them into the future, without any of the contraptions of any of the other bills that the administration was associating itself with [inaudible] before.”

Pelosi refused to give the Trump administration any credit for Operation Warp Speed, which accelerated the creation of both vaccines.

A second reporter asked Pelosi if she regrets not accepting a deal months ago. Pelosi responded, “I’m going to tell you something, don’t characterize what we did before as a mistake, as a preface to your question, if you want an answer.”

“That was not a mistake, it was a decision and it has taken us to a place where we can do the right thing without other shall we say considerations in the legislation that we don’t want,” she continued. “Now, that is it. The fact is, I’m very proud of where we are. My chairs have worked very hard on all of this. They were not even happy with a proposal that we made the other day, before we saw this proposal.”

According to Fox Business, the new bill, which does not include a stimulus check, “allocates about $300 billion in funding for small businesses through the Paycheck Protection Program, $240 billion in aid for state and local governments, $180 billion to extend boosted unemployment benefits at $300 per week through March and a temporary moratorium on COVID liability lawsuits to allow states enough time to design their own laws.”

36 thoughts on “Pelosi Suddenly Willing to Agree on Relief Bill”