BREAKING NEWS
Home Politics Pelosi: No one comes to Congress to impeach the President 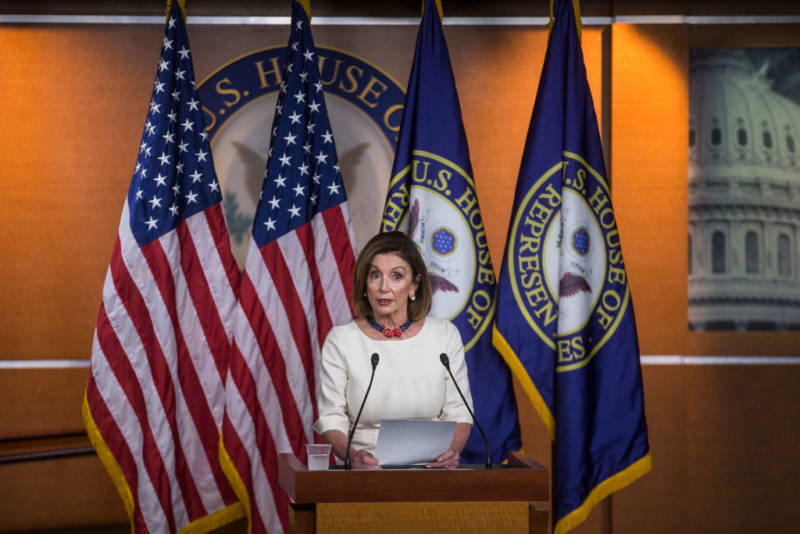 Pelosi: No one comes to Congress to impeach the President

Yes, House Speaker Nancy Pelosi actually said that – and the pro-impeachment press played her comment without rebuttal.  That let her blatant and obvious political lie stand.  That is what the elitist media do.

California Congresswoman Maxine Waters calling for Trump’s impeachment BEFORE he was inaugurated.  She raised that desire during the transition period when the Democratic Party, the political left and most of the east coast liberal media were in a state of shock.  The knee-jerk mood on the left was to undo what the public had done – elect Donald Trump to the presidency of the United States.

Since it is not possible to impeach a President before he takes office – despite what unhinged folks like Waters seem to think — the dazed left tried to get Electoral College electors to break faith by defying the vote of their constituents to elect someone – anyone else — to be President.  That was not even the craziest idea emanating from the deranged left.

We can recall that there was even a totally idiotic effort to have the Congress refuse to seat President Trump – even though the Congress has no authority to do that.  And the Congress can only impeach AFTER a person takes office. Duh!  And that is exactly what they are trying to do now.

In offering up her mendacious talking point, Nancy appears to have conveniently forgotten that Maxine Waters repeated and repeated her call for an impeachment of Trump throughout his years in office.  Pelosi seems to have forgotten that Texas Congressman Al Green entered a bill of impeachment in the first year of the Trump presidency.  Other bills of impeachment were entered subsequently.  These folks obviously came to Congress with malice of forethought to impeach Trump.

Did Pelosi forget about Minnesota Congresswoman Rashid Tlaib who told her young son that she was going to Washington to “Impeach the m*****f****r.”  When she relayed that bit of dubious motherhood to the others in her freshman class, she was cheered and applauded vigorously.

New York Congresswoman Alexandria Ocasio-Cortez made no secret of her intent to push for impeachment of the President as soon as she was sworn in.

Contrary to Pelosi’s contention that no one comes to Congress with a desire to impeach a President, it is more accurate to say that the vast majority of her Democrat caucus in the 116th Congress came there motivated by one unifying thought – impeach President Trump.