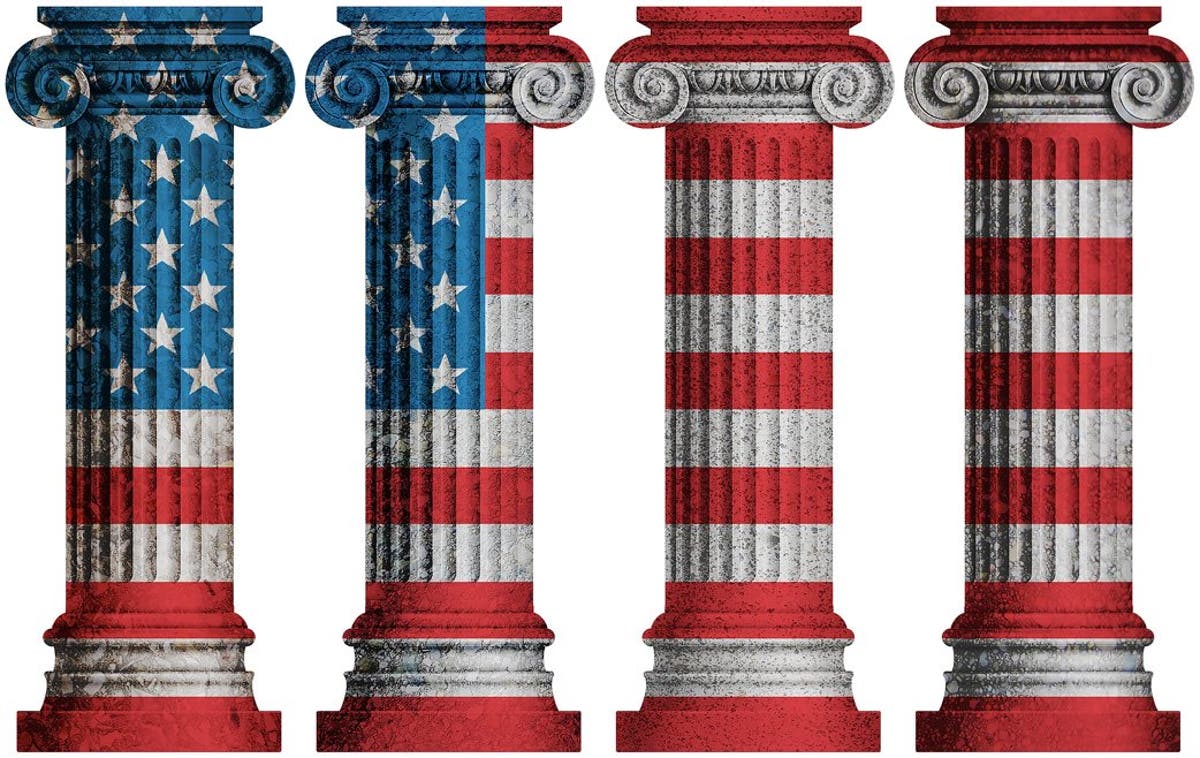 As I peruse the news, there is a particular virulent narrative that proffers the argument that the American democratic Republic is being undermined – and even permanently damaged – by the political chaos and controversy surrounding the 2020 election.

This is not a new theme for the elitist anti-Trump new media.  They developed this narrative more than four years ago – questioning the legitimacy of the Trump presidency.  They have been throwing out fact-challenged appellations such as “dictator” and “authoritarian” ever since.

Since the election — and Trump’s claims of a rigged election that denied him his victory – the narrative on the left has gone hyperbolic … bonkers.

They have long speculated on the ridiculous notion that Trump would somehow refuse to leave office if he was defeated.  And then, in an attempt to breathe life into that dead-on-arrival narrative, they claim Trump is undermining the Constitution – breaking the law – and (you better sit down for this ) BRINGING DOWN THE REPUBLIC by destroying the pillars of democracy.

In a sadly typical example of this nutty conspiracy theory, the crew on MSNBC’s “Morning Joe” actually accused Trump of engineering a coup. To underscore their head-scratching allegation, host Joe Scarborough even read the definition of a coup – “the taking over of a government by illegal use of force.”

Scarborough then asked one of the show’s regular bobblehead panelists, Eugene Robinson of the Washington Post, whether that definition described Trump’s actions.  Surprising to anyone who can comprehend English, Robinson said it sure did.  What?  That definition clearly established that whatever Trump is doing about the 2020 election, it is NOT an attempted coup.  Not even close.

There never was – and should not now be – any doubt that Trump will exit the White House on January 19, 2021.  He will start packing his bags sometime after the Electoral College elects former Vice President Joe Biden as the official President-elect.  When recently asked by a reporter if he would leave if Biden was officially declared the winner, Trump responded “Of course, I would … and you know that.”  The very question, itself, shows the maliciousness of the repeated bogus narrative.

The attempted coup narrative is just malicious and dishonest.  It is made up out of a whole cloth lie.  There is no coup going on.  Trump is doing NOTHING illegal or unconstitutional.  In fact, he is not doing anything more or less than Al Gore did in 2000, when he contested in the courts and in recounts the outcome of the presidential election for weeks after Election Day.  At one point, he had conceded and then withdrew his concession.

Which is also a point worth understanding.  There is nothing in the Constitution or in law that requires a candidate to concede.  In fact, it has no bearing whatsoever on the outcome of an election.  That is determined by the certified vote count, and occasionally by recounts and court decisions.  No candidate can win an election by simply not conceding.

Democrats and the media do not seem equally bothered by the fact that Stacey Abrams never conceded her defeat in the Georgia gubernatorial race in 2018 – and to this day, she claims the election was rigged by voter suppression.  Neither her self-serving claim nor her lack of concession prevented her ultimate defeat.  The system worked.

Whether Trump’s claims have merit or not – whether folks believe him or not – is immaterial.  They are just that … his claims.  In terms of the process, the rule-of-law, the Constitution and the outcome, such claims alone do not change anything.  What is established in recounts and courts-of-law are all that matter – and in the case of a President, what is voted by the Electoral College.

Despite Trump’s claims – and the hyper hysteria in which Democrats and the news media wallow – our constitutional process is working like a finely tuned machine.  Trump is merely using the constitutional and legal powers available to him to demand recounts and file cases in court.  Whether his claims are well-founded or unrealistic does not matter.  The process will run its course.

Trump’s effort to change the outcome is NOT undermining the Republic, democracy or the rule-of-law – but rather should be a celebration of the importance and durability of our democratic institutions.  Trump cannot simply will himself to be the winner – like a dictator or some sort of coup plotter.  He knows that – and he is neither of those things.

His challenges are actually good for the democracy because looking into the dark corners to investigate vote manipulation – small or large – is an essential part of the eternal vigilance in which Thomas Jefferson admonished us to constantly engage.  A greater threat to democracy comes from those who implore us to not even look.  THAT is the edict of dictators and authoritarians.

People put a lot of emphasis – too much , in fact – on the rationality or legitimacy of Trump’s claims AND the exaggerated counterclaims of his political adversaries on the left.  They have their opinions and narratives, but even such opinions and narratives are subjugated to the rule-of-law and the Constitution.  If you believe that Trump was cheated … fine.  If you believe that he is crazy … fine.

The Republic is not falling.  Democracy is not being remotely threatened.  We are not being ruled over by one man.  By all measures, we will have a new President next year – like it or not – and all the machinations over fantastical narratives of coups and contemporary conspiracy theories about the fall of the Republic will be in the dustbin – without the slightest damage to the foundation of our Republic.

Is Biden Abusing Kids to Appease the Left?

Is Meghan Markle Running for President?

6 thoughts on “Is This The Collapse Of Our Democracy?”