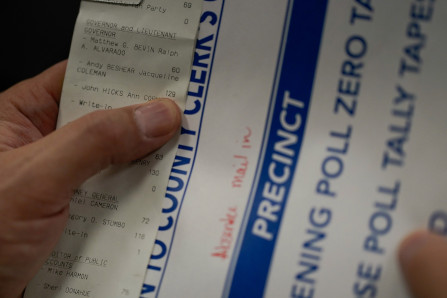 Is it dollars or poll numbers that matter … or neither?

During this pre-primary season, the media has little to report except poll numbers and money raised.  Yes, the candidates talk about their issues, but who cares what a candidate proposes who is struggling to rise beyond one percent in the polls and cannot raise enough money to take a bus to Dubuque.

The simplest – and simplistic – analysis of candidate strength is to see who is ahead in the polls and who raises the most money.   That is generally the viewpoint of the pundits and the candidates who happen to have the best numbers in one or both categories.

On the Republican side, there is no real contest.  President Trump is the frontrunner because there is no serious competition.  And as far as fundraising, Trump – with $46 million raised in the latest cycle — is the leader among all candidates – Republican or Democrats.  The level of Trump’s fundraising suggests that despite all that the Democrats and the media have thrown at him, his supporters are holding firm.

The real race for the nomination is naturally on the Democrat side.

In most polls, former Vice President Joe Biden is ahead with Senators Bernie Sanders, Elizabeth Warren and South Bend Mayor Pete Buttigieg duking it out for second place.  Contrary to expectations and tradition, the person leading in the polls is not leading in fundraising.  Far from it.

In the latest cycle, it is Sanders who swamps the field with a total of $35 million raised from millions of supporters – averaging approximately $18 per contribution.  That is a phenomenal contribution report and suggests strength beyond his polling numbers – which are not all that bad.

Buttigieg claimed second place with a haul of $25 million.  Frontrunner Biden had to settle for third place with $23 million.  Senator Elizbeth Warren’s donations dropped with her polling numbers.  She took in $21 million.  While Buttigieg, Biden and Warren are within a few million dollars of each other, they are trailing Sanders by $10 million or more.

Of course, the two billionaires in the race – former New York Mayor Michael Bloomberg and businessman Tom Steyer — are ahead of everyone in financial resources.  They are not raising diddly-squat because they are mostly self-funding, as in Steyer’s case, and totally self-funding in Bloomberg’s case.  And even Steyer cannot match Bloomberg even if he spent his entire $1.4 billion fortune.   Bloomberg could match that and still have more than $50 billion left over.

Steyer is proof that money is not everything.  He has the worst expenditure to polling numbers ratio of any candidate – although Bloomberg could eventually also best Steyer in that, too.

As candidates drop out, both the polling numbers and money raised will change. Sanders and Warren are currently splitting the far-left progressive polling numbers and money. When – not if – one of them drops out, the other is likely to get the lion’s share of the other’s support.  Right now, it looks like that will be Sanders – but nothing can be certain.  One more Sanders heart attack and Warren could again be on top.

There are still a lot of single digit Democrat candidates pulling in a lot of money.  As they drop out the numbers will shift.

The large field of Democrat candidates is soaking up a lot of money.  By the time a candidate is selected there is likely to be a LOT of donor fatigue.  Trump and the Republicans should go into the General Election with an enormous financial advantage.