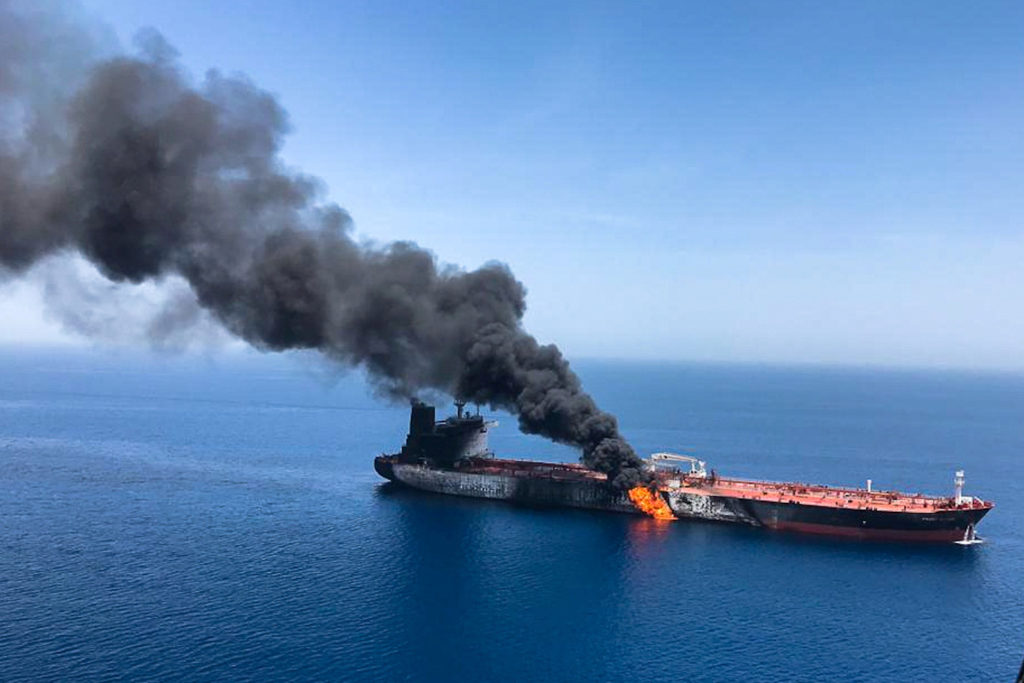 After weeks of speculation, allegations, and accusations, the Defense Department finally released the assailants in action, responsible for attacking several oil tankers within the last month steaming their way through the narrow and strategic Strait of Hormuz.

The indisputable evidence presented by the U.S., is a brief black and white surveillance video of an Iranian gunboat removing an unexploded mine that had been previously attached to a Japanese owned oil tanker seriously damaged as it steamed in international waters within the Gulf of Oman early Thursday morning.

Moreover, the visual captures an Iranian sailor alongside the hull of the damaged “Kokuka Courageous” standing in the gunboat and carefully removing the unexploded mine, before speeding off.

The surveillance video was taken on board the USS Bainbridge, a guided-missile destroyer which rescued 21 sailors from the stricken Japanese-owned tanker.

This region of the world is perhaps one of the most politically sensitive regions on earth, a vital oil route and merchant shipping lane, responsible for 1/3 of the world’s oil exports.

A U.S. official told Fox News an Iranian gunboat approached the Kokuka Courageous later in the day and removed the unexploded triangular-shaped limpet mine, the same type of mine used to damage four other tankers in the Gulf of Oman last month.

The official went on to say that the Iranian vessel did not bear any military markings, flags or identifiable uniforms, however the class of vessel reordered on the video, is well known by the U.S. military called a fast inshore attack craft (FIAC), the same type of ship used by Iran in recent years to harass American warships in the Persian Gulf.

In another incident Thursday, a Norwegian-owned vessel called the “Front Altair,” was also attacked in the Gulf of Oman, and perhaps even more ominous, its crew (according to U.S. officials),  is now being held in Iran.

Cmdr. M. Kathryn Devin, the USS Bainbridge’s commanding officer, said of the rescues. “This is what we’re out here for, our mission is to ensure maritime safety and to answer the call for aid when we can.”

In a news conference on Thursday afternoon, Secretary of State Mike Pompeo addressed the escalating and unprovoked attacks on merchant oil tankers by Iran, calling the attacks a “blatant assault.”

Adding, “This assessment is based on intelligence, the weapons used, the level of expertise needed to execute the operation, recent similar Iranian attacks on shipping, and the fact that no proxy group operating in the area has the resources and proficiency to act with such a high degree of sophistication.”

On Friday President Trump continued where Secretary of State Pompeo left off in an interview with “Fox & Friends,” the       President armed with the video evidence once again condemned the terrorist régime stating, “We don’t take it lightly.”

Adding, “Iran did do it and you know they did it because you saw the boat,” he said, before pointing to a video that showed an Iranian vessel removing an unexploded mine attached to a Japanese-owned oil tanker.

The President continued, “They’re a nation of terror and they’ve changed a lot since I’ve been President, I can tell you.”

The terrorist régime, of course, denies the attacks, in a news release at Iran’s U.N. Mission the régime rejected the claims made by the U.S., despite the video evidence stating, “Iran stands ready to play an active and constructive role in ensuring the security of strategic maritime passages as well as promoting peace, stability and security in the region.”