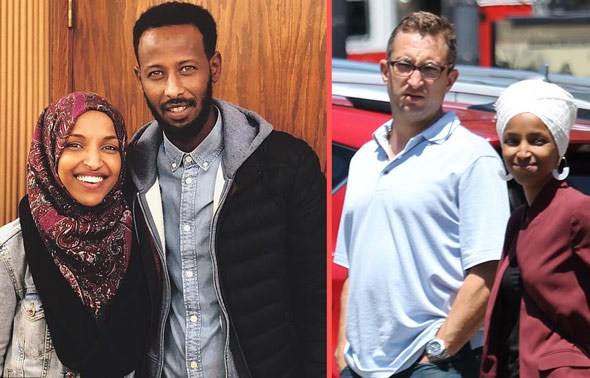 Rep. Ilhan Omar’s husband, Ahmed Hirsi, wants out and is ready to file for divorce from the controversial freshman congresswoman. This according to a longtime friend of the couple, who has been speaking to the New York Post.

The unnamed source told the New York tabloid that Hirsi is disgusted with Omar’s behavior and is poised to file for divorce after the revelation in a bombshell court filing that she allegedly had an affair with DC political consultant Tim Mynett.

The Minnesota congresswoman and her husband allegedly separated in March, and Omar asked Hirsi to divorce her around that time because she didn’t want to file the papers — but Hirsi refused, telling her if she wanted a divorce she should do it herself, said the source, who has known both parties for 20 years.

But now, the husband allegedly changed his mind after Tim Mynett’s wife last week filed bombshell divorce papers claiming her husband was having an affair with the Somali-born US representative. The source tells the Post that Hirsi is angry that he had been made to look the fool by the allegations of the extramarital affair.

“I’m surprised he hasn’t filed already,” the source told The Post, adding that Hirsi was “very confused” in the wake of the bombshell allegations, but that he claims that he still loved his wife and was reluctant to expose their three children to a public divorce battle.

The freshman congresswoman, 37, insisted she and Hirsi, 39, were still together and denied the charge she was dating Mynett in an interview with CBS affiliate WCCO, on the day back in August that Mynett’s wife filed for divorce.

However, the Post has confirmed that Omar and Hirsi have been living apart since March — around the same time she was spotted having dinner with Mynett at a California restaurant — with Omar moving into a luxury condo in downtown Minneapolis and their split an “open secret” in town.

The family home they shared in the Cedar-Riverside neighborhood — nicknamed “Little Mogadishu” for its large Somali population — appears to be abandoned, with the curtains drawn and cobwebs growing over the front porch, when a Post reporter visited last week.

Hirsi, a senior policy aide to a Minneapolis city councilwoman, is reportedly bouncing between friends’ houses and stays at the luxury condo when Omar isn’t in town, with the kids also spending time with a grandfather, the source said.

Omar and Hirsi were first engaged in 2002. But the duo never legally married; instead, they wed in a traditional Muslim ceremony and had two children before splitting up in 2008, Omar has said.

The next year, she married Ahmed Nur Said Elmi, whom she described as a “British citizen,” records show. They split up in 2011 and Omar and Hirsi got back together and had a third child in 2012, records show.

However, public documents obtained by The Post raise discrepancies in the timeline of Omar’s marriages to Hirsi and Elmi.

Documents suggest Omar never stopped living with Hirsi — even after they ended their religious marriage and she was legally married to Elmi. In February 2009, when Omar legally married Elmi, she listed their marital address as a property in Columbia Heights, a suburb in Minneapolis.

However, just three months later, Hirsi used the same Columbia Heights property as his personal address on business filings for his One on One Cafe Lounge.

Omar and Hirsi moved to North Dakota together with their two children, according to a 2013 article in Twin Cities Daily Planet, even though she was supposed to be estranged from Hirsi and married to Elmi.

In traffic violations from 2008 to 2012 — the entire time Omar was married to Elmi — the congresswoman and Hirsi also listed their address as the family home in Cedar-Riverside, suggesting they never stopped living together.

The congresswoman has refused to comment on both the affair allegations and the discrepancies in her marriages — dodging questions from a Post reporter at an event in Minneapolis last week.