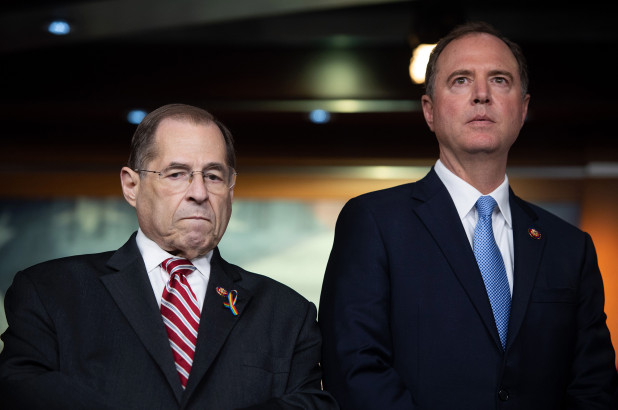 If you think Schiff is bad … wait until Nadler takes over

One of the reasons that this current phase of impeachment folly is called an “inquiry” is that it is the normal responsibility of the House Judiciary Committee to hold a REAL impeachment hearing – one that will lead to Articles of Impeachment, or not.

What is going on in the House today is nothing more than a long public relations stunt with Intelligence Committee Chairman Adam Schiff as the current ringmaster.  There was no reason that Democrats could not have simply voted to launch an impeachment HEARING – as has been the normal course in the past.  They could have had all the same witnesses – even some behind closed doors.  The only difference is that the rights of the accused – in this case the President of the United States – would have been preserved.

House Speaker Nancy Pelosi chose to bypass the normal impeachment process in order to gin up a political lynching.  (Yes, I called it that in the colloquial sense of the word.)  She assigned six committees to “inquire” as to whether Trump committed any offenses worthy of an impeachment HEARING.

You will notice I did not say “crime.”  That is because impeachment – as currently defined — does not require a crime even though the Constitution says that impeachment must be founded on “treason, bribery HIGH CRIMES and misdemeanors.”  That sounds like serious stuff.

Pelosi and Co. understand that the Constitution be damned, the only requirement for impeachment is getting a majority of one political party to pass Articles of Impeachment.  Consequently, she has undertaken the most political and unnecessary impeachment process in the history of the nation.  She has weaponized impeachment.

Of course, such Articles must be filled with language suggesting abuse of power, obstruction of justice and other dubious accusations that can be made to sound like crimes.  In fact, the Democrats have all those talking heads on television saying flat-out that Trump is guilty of this crime or that crime. Of course, that is only their opinion – or at least their politically-based claim.

Once the Democrats finish their repetitious “inquiry” – rolling it into a quasi-public phase — they will transfer the impeachment business over to the Judiciary Committee to conduct the “hearing” that will most likely lead to a highly partisan vote on Articles of Impeachment.

In the meantime, we will have the impeachment ball lateraled to Jerry Nadler, the diminutive chairman of the House Judiciary Committee and a stridently partisan New York Democrat, who makes Schiff look like the champion of bipartisanship.

Nadler craves the center stage over impeachment.  He was among the earliest voices demanding impeachment – a full-fledged member of the #NeverTrump Resistance Movement.  We got a preview of Nadler when he was undertaking his own investigation of the Trump administration – saying that HIS investigation was essentially an impeachment hearing.

Speaker Nancy Pelosi squelched that idea as being a bit premature.  Instead, she concocted the impeachment “inquiry” concept as a precursor to a legitimate hearing. It was only a temporary setback for Nadler since the impeachment process would eventually have to come to his Committee.

Anyone who holds any hope that Nadler will conduct a fair and nonpartisan hearing does not know the guy.  He has already accused Trump of every crime in the book.  He even claims that Trump criminally colluded with Russian even though Special Counsel Robert Mueller made it VERY clear that he had not – nor had anyone associated with the Trump campaign.

Nadler insists that the Mueller Report accused Trump of at least 10 counts of obstruction of justice – even though he left that decision to the higher-ups at the Department of Justice – and they declared that NONE of the examples of POSSIBLE obstruction rose to the level of a crime.  End of subject.

Some Democrats – apparently including Pelosi – want to limit the charges in any Articles of Impeachment to abuse of power associated with the allegations that Trump attempted to enter into an inappropriate quid pro quo with Ukrainian President Volodymyr Zelensky.  Others – including Nadler – want to include every conceivable charge – even those discredited in the Mueller Report.

If we were dealing with a court-of-law, all the charges leveled against Trump would not likely survive the first Motion to Dismiss.  But this is not a court-of-law.  Impeachment is a political process, and Nadler is the consummate political creature.  His only interest is to create enough cover for the Democrat majority to impeach Trump.

If you think the Schiff inquiry was marred by political acrimony and shenanigans, you ain’t seen nothing yet.