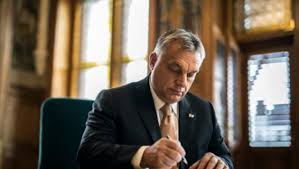 The two national populist leaders – Orbán and Salvini – are scheduled to meet in the Hungarian capital, Budapest, on Thursday in what’s the most recent meeting between the two heads of state.

The two have become closer allies over the past year.

During an interview with the Italian newspaper La Stampa the night before the state visit, Prime Minister Orbán expressed his admiration of the League party’s Salvini.

When asked about the upcoming visit, Orban said, “Tomorrow, [Salvini] will arrive in a country where people see him as a friend… We share a common fate: both of us had to endure attacks.”

This isn’t the first time that Orbán has praised Salvini. In the past, he referred to the League’s leader as one of his ‘heroes’. In fact, during his interview with La Stampa, Orbán used the term again, saying that Salvini is “the hero who was the first to stop migration by sea, while we did the same on land.”

The Hungarian leader continued, saying, “Migration is the most important question history has confronted us with… foreseeable mass movements of people should be prevented if possible.”

This is why I think Salvini is the most important person in Europe today,” Orbán asserted.

Earlier this year, in March, Orbán’s national conservative and right-wing populist Fidesz party, was suspended from the European People’s Party (EEP) – an EU parliamentary voting bloc that claims to be ‘center-right’ – for a eurosceptic poster campaign which criticized President of the European Commission Jean-Claude Juncker and globalist billionaire George Soros.

Recently, the EPP’s leader Manfred Weber of Germany has declared, “The nationalists will be our enemies.”

During his interview with La Stampa, Orbán stated that he thought the EPP was committing ‘suicide’ by working alongside leftist parties in Europe. The Hungarian PM said, “Let’s not tie ourselves to the left. Let’s find another path: co-operation with Europe’s political right.”

Following Fidesz’s suspension from the EPP, the idea of forming an alliance between Salvini’s League party and other populist parties – including Orban’s party – was alluded to.

In the past, Orbán has stated, “Hungary is too small to enforce its opinion in Europe. Media, NGOs, universities in Europe are all against us and can destroy us. That’s why we need strong allies.”

The Hungarian Prime Minister has also lent his support to the possibility of an alliance between long-time national populist allies, Poland’s ruling Law and Justice Party (PiS) and Italy’s League party, when Salvini visited Poland in January,