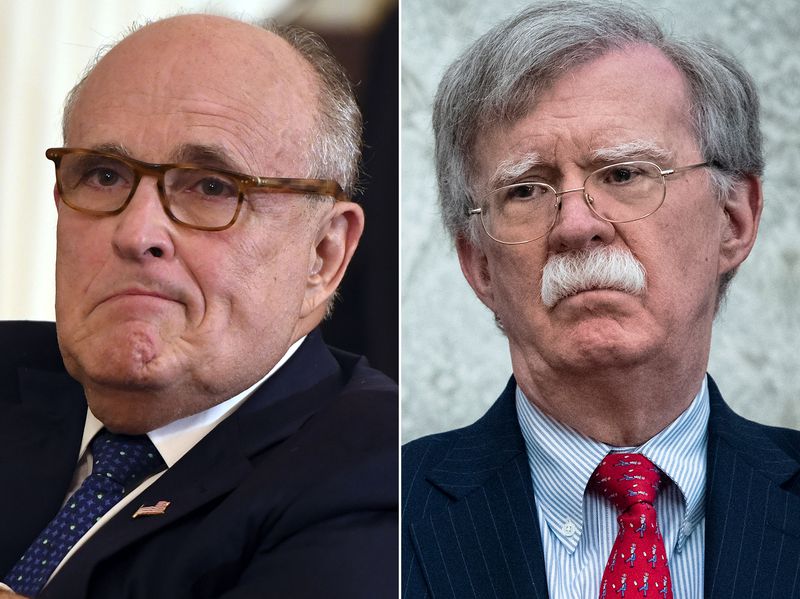 Giuliani At Odds With Boltan

Rudy Giuliani said that he was “disappointed” in former National Security Adviser John Bolton, after reports emerged that he had called Giuliani a “hand grenade” over his Ukraine investigations and that Bolton had told a top aide to alert a lawyer in the National Security Council over Giuliani’s apparent meddling in State affairs.

“I am disappointed in John,” Giuliani said in a statement to Fox News. “I’m not sure he realizes I received all this evidence as part of my representation of the president. It was all part of the evidence, and suppression of evidence, involving Ukrainian collusion and the origin of some of the false information against the president.”

The comments from the president’s personal attorney came after it emerged that Fiona Hill, a former senior director to Russian and Eurasian affairs, told lawmakers Monday that a meeting between Ukrainian and U.S. officials left her and Bolton so concerned that he told her to alert John Eisenberg, a lawyer at the NSC. According to the New York Times, Hill said Bolton told her to notify Eisenberg about the efforts by Giuliani, and acting White House chief of staff Mick Mulvaney and E.U. Ambassador Gordon Sondland to press Ukraine to investigate Democrats.

“I am not part of whatever drug deal Sondland and Mulvaney are cooking up,” Bolton allegedly told Hill, according to the Times. Hill said Bolton had previously called Giuliani a “hand grenade who’s going to blow everyone up.”

The dramatic testimony demonstrated how Giuliani and others’ efforts to investigate activity in Ukraine — particularly that of former Vice President Joe Biden and his son Hunter– has split the White House.

House Democrats launched an impeachment inquiry last month, alleging that Trump withheld crucial US military aid to Ukraine in an attempt to force the Ukrainians into investigating his political opponent — specifically Biden’s role in the firing of a top prosecutor who had been investigating a Ukrainian gas company, where Hunter Biden sat on the board.

Trump has denied any quid pro quo, and claims instead that he was only looking to crackdown on corruption. He has instead attempted to direct attention to Hunter Biden’s activities in both Ukraine and China.

As the impeachment inquiry has heated up, it has also brought more scrutiny to Giuliani’s role in spearheading a separate investigation into Ukraine. The New York Times reported Friday that prosecutors in Manhattan are investigating whether the former New York City mayor broke lobbying laws in his own dealings with Ukraine. On Monday, Reuters first reported that Giuliani’s firm had been paid $500,000 in 2018 by one of the two Ukrainian-American businessmen arrested last week on campaign finance charges.

Trump gave his backing to Giuliani on Saturday, tweeting that he was a “great guy and wonderful lawyer.”

“So now they are after the legendary “crime buster” and greatest Mayor in the history of NYC, Rudy Giuliani. He may seem a little rough around the edges sometimes, but he is also a great guy and wonderful lawyer,” he tweeted. “Such a one-sided Witch Hunt going on in USA. Deep State. Shameful!”