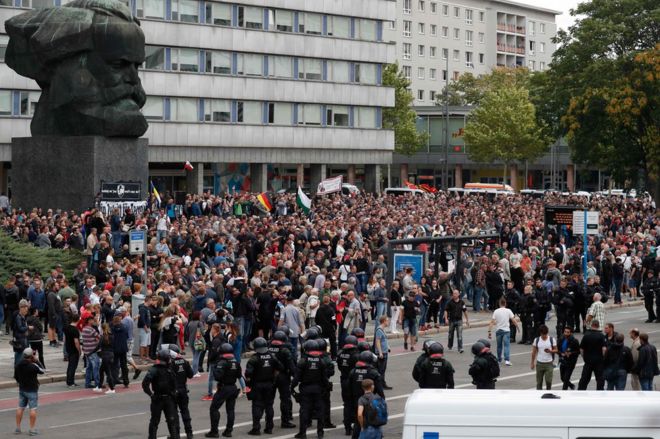 In a supreme case of historical irony, the far-left ideology formed in reaction to that of the Nazi party has caused chants such as “Jew, Jew, cowardly pig, come out and die alone” to return to the streets of Germany. With Stars of David burning in the public square, a standoff with Russia over Eastern European territory, a stranglehold on Greece, and an ever-expanding role in the Arab world, someone who had slept since the 1940s might conclude Germany was the victor of WW2.

As the strongest economy within the European Union, Germany had accomplished its near-century long quest of controlling Europe. However, 77 years after the beginning of this journey, on the brink of success, Germany faces the very real risk of imploding under internal pressure. The external threats – such as the one million migrants now living in the state – are only welcomed in by the deep-seated, indoctrinated masochism of the German government.

The capitulation of the policing authorities, also known as the abandonment of the German people, has already occurred. In a leaked letter from the German Chancellor’s office to Kiel’s police authority, police were alerted not to pursue smaller offenses (etc. shoplifting/pickpocketing) due to being overburdened. The overburdening in question comes in the form of mass sexual assault and record high reports of violent theft. This past New Year’s Eve, for example, German authorities reported nearly 2000 sexual assaults, with the vast majority of the assailants being “southerners,” the politically correct word for Islamic migrants in Germany.

In response to 1000’s of women facing irreversible mental scarring, Henriette Reker, the female Mayor of Cologne, offered the following deplorable, victim-blaming statement: “There’s always the possibility of keeping a certain distance of more than an arm’s length — that is to say to make sure yourself you don’t look to be too close to people who are not known to you, and to whom you don’t have a trusting relationship.”

According to the Associated Press, these refugees who commit crimes in Germany do not even face deportation because “the danger they face in their home countries is perceived as greater than the reason to deport them.” Essentially, we are seeing a government that has put the safety of migrants over the safety of its citizens. With one million migrants already in Germany and many more on their way, there is no wonder why only 29 percent of Germans have a positive opinion of immigration from the third world. Unfortunately, when Democracy is merely bank sponsored theatre, a consensus of the public has little to no influence over policy.

With the current projections, German taxpayers can expect to spend €77.6 billion ($86.2 billion) over the next four years feeding, housing and training refugees as well as helping their home countries to stem the flow, according to updated budget estimates for the period from 2017 to 2020. Since the vast majority of migrants are poorly educated and have virtually no valuable skills, the German working class can look forward to both increased competition for jobs and increased taxes to pay for those now competing. Not surprisingly, these anti-German people, anti-democratic policies have caused a rise in far-right political parties and violence. We are witnessing a country tearing itself apart – out of principle.

But why, Germany? Why have far-right groups grown to a post WW2 peak? Why have the chants for Jews to die returned to streets? Why have you betrayed your working class? Why does an alleged democracy have policies only 27 percent of its people agree with? Why are you blaming women for being victims of the men you brought to their towns?

The origin of leftist thought came from the idea that nothing is created without the exploitation of others: If there are rich people, they must have exploited poor people to arrive at their success. Extrapolated to a global scale, Germany, as white capitalists ( the worst, most shameful thing to be according to the left), must conclude others had to be exploited to arrive at success. Known for their pragmatism, we see Germany switch over to a policy of self-flagellation. It is of no import to the liberal whether or not people are economically drowning in Germany or that women are raped on an hourly schedule; rather than that, the only policy is that of guilt-induced, borderline-like self-harming. Objective thinking comes secondary to the self-harming needed to rectify the guilt associated with success.

There is certainly an argument that the West played a role in the migrant crisis, but burning down one’s own home has never helped fellow victims of house fires. The German people must now decide whether or not they accept being the sacrificial lambs of ideologues.