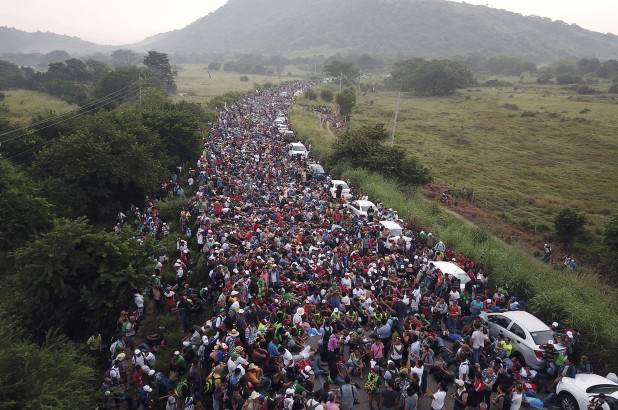 Perhaps it is just my Florida perspective, but the caravan of migrants heading for America’s southern border reminds me of our frequent hurricanes. They start out a long way away, and they grow as they approach the border. We get daily reports of the progress. We are never quite certain what will happen when they reach landfall. Will it just be utter devastation or just a bad hair day. And … they always result in political fallout.

The caravan of migrants currently passing through Mexico is a bit of a human hurricane. It started out with fewer than 2000 people but has quadrupled as it moved northward. We do not know how many will actually arrive at our border since new recruits appear to be offset by those giving up in the face of U.S. warnings or deciding to accept Mexico willingness to offer asylum.

So, who are these people? Why are they coming here? And why such an organized caravan rather than the usual appearance of individuals, families or small groups appearing at our border on a daily basis?

These questions are not easy for most Americans to answer because there are two VERY different answers to each of those questions.

If you follow the east coast left-wing news, you will be led to believe that these are mostly families and women and lots of children. They are escaping the horrors of crime and poverty in their ancestral homes – most from Honduras and Guatemala. The images are heart breaking. On television, they appear to be those “huddled masses yearning to breathe free” for whom Lady Liberty lifts her lamp “beside the golden door.”

And yes, we are the most tolerant and immigrant friendly nation in the world – maybe even in the history of the world. We should welcome new arrivals – especially those who bring value or are escaping dangerous oppression – because we need them to both create and fill the new jobs of a growing economy.

In bragging onto ourselves, however, we should also remember that virtually every new immigrant class was met with opposition, prejudice and hostility. It was the case with the Irish, the Italians, the Poles, the Chinese, the Vietnamese, Africans, Jews, Arabs and, of course, Latinos. Thankfully, we are better at assimilating than welcoming.

In terms of the caravan, the left is basing its position on a huge straw man argument – that those concerned are motivated by racial prejudice and a white fear of what is now referred to collectively as “brown people” – a euphemism for all non-white. The left claims to be fighting against racism when what they are fighting for is to pack the population with people they believe will be politically sympathetic.

The basic issue, however, is illegal immigration. There has been no objection to people entering the United States through the legal process by which they can be vetted. This includes those applying for one of the various forms of visas and those seeking asylum. That should be a universal desire, but the left sees no reason to not bypass that process by allowing anyone to slip across the border or to apply for asylum and then blowing off the obligatory follow-up court date – known as “catch and release.”

Based on those 10-plus million already residing in America, we know that approximately 10 percent are deportable criminals. We know that at least 50 percent of the employable are without jobs – obviously not including the dependent children. Those proportions generally hold up even as the number of illegal aliens increases. So, it is safe to assume that 10 percent of those in the caravan are likely to be criminals — undesireables. Now we do not know that for sure, and the only way we can separate the criminals from the majority good folks is by vetting.

We also know that the criminal elements cross our border illegally because they cannot pass the vetting process. We can assume that based on logic and the fact that most of the criminal class did enter illegally.

There is also the health issue. One of the primary activities of the matriculation process is to determine the health of individuals entering the country – even Americans returning from overseas. We need only recall the extreme vetting of people returning from Africa during the Eboli crisis or from China during the SARS epidemic. The laws of probability tell us that a significant number of those in the caravan coming from nations where the poor receive lousy healthcare will have serious diseases. We may not know how many or who, but that again is why vetting is so important.

Since there is a clear political underpinning to our immigrations process, it is reasonable to learn what has motivated this particular caravan. How did they get so organized and who is doing the organizing? Who is paying for it? This is not an organic pilgrimage. To understand the motivation, we need to know who is sponsoring this long, logistically complex and expensive caravan – and why.

Though it has been just a war of words at this point, it is important to find out if there are any bad international actors using the caravan as a Trojan Horse. It would be surprising if there were not. We know that Jihadists have tried to use every means to enter the country – and often succeeded. In fact, there already have been caravan people identified as having come from non-Latin nations, such as India and the Middle East. There numbers may be relatively few, but it is important to ascertain their reason for taking this route.

When viewing all those pictures and videos of the women and children, we should keep in mind that almost 80 percent of the travelers are military age males – mostly unmarried. Just look in the background behind those touching images of families and children – or take a closer look at the wider view images of the caravan — and you will see mostly males. This, in and of itself, is not damning, but one wonders why the liberal media goes so far to avoid more objective imagery.

The solution is quite simple. We should vet those entering through the legal process and turn away ALL who will not do that. Instant deportation. Those who do not appear for their court dates to complete the process of asylum should be found and potentially deported. Deport a few and many will start showing up for those court dates.

There is only one way to have a legal and safe immigration process and that is to enforce the laws.