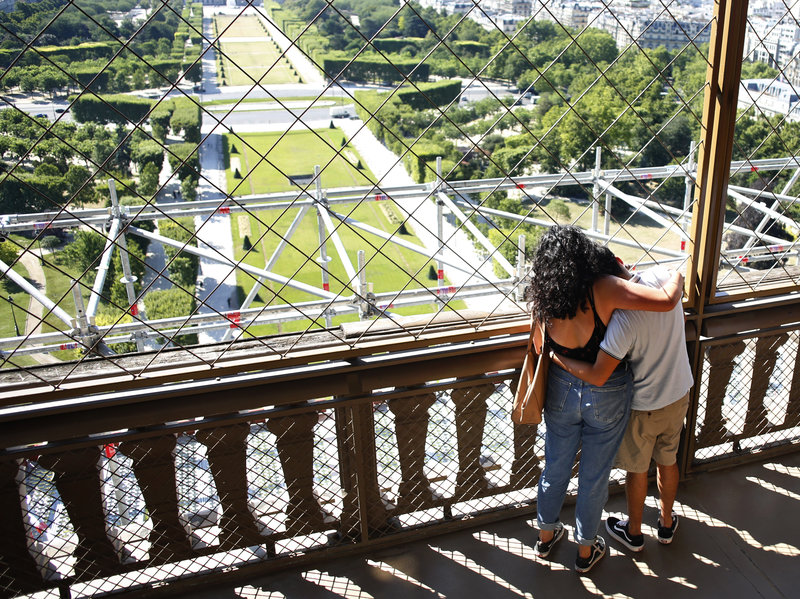 Eiffel Tower Reopens In Paris After A 3-Month Shutdown

The Eiffel Tower reopened to visitors Thursday morning after having been shut down for more than three months because of the COVID-19 pandemic. It was the Paris landmark’s longest closure since World War II.

The reopening is a dramatic sign of people reclaiming public spaces in France following more than 100 days of restrictions. But the tower’s highest point is still not open – and for now, visitors will need to take the stairs.

The stairs-only rule is one of several restrictions at the site, which draws millions of tourists during a normal year. Face masks are compulsory for all visitors over the age of 11, and physical distancing markers are in place.

The reopening took place on a sunny and clear morning, promising wide views of the city. Paris Mayor Anne Hidalgo hailed the return of visitors — and as the first guests prepared to make their way up, a band of drummers performed in the plaza at the tower’s base.

Elevator service inside the monument is slated to begin again on July 1. For those who can’t wait, a ticket to walk up to the Eiffel Tower’s second floor – the wider area that cuts off just as the tower narrows toward its spire – costs 10.40 euros (about $11.65).

Tickets are being sold online in 30-minute increments. Shortly after noon local time Thursday, spots were still open through the afternoon, though the evening tickets had all been claimed, presumably by people eager to see how the City of Light comes to life in the night, even during a pandemic.

A French government official declared the coronavirus to be “under control” in early June. Days later, France joined the rest of the European Union in lifting many border restrictions within the bloc – part of a plan to salvage part of the summer tourism season.

There are signs that the virus has remained under control. France’s positive test rate for the coronavirus is 1.5%, according to the most recent data from the national public health agency. Only two of its 104 departments are considered to be in a highly vulnerable situation – and those are on islands in the Caribbean and the Indian Ocean.

France has reported 161,348 confirmed coronavirus cases, including 29,731 deaths, according to government data.