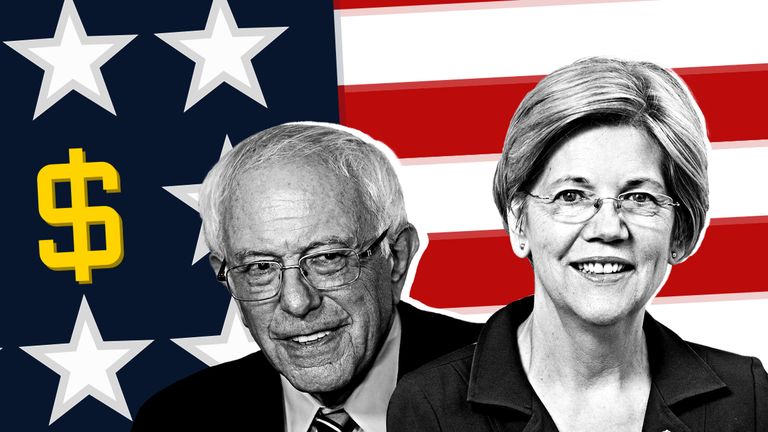 One of the evergreen characterizations of our two major political parties is that Democrats represent the poor and Republicans represent the rich.  Bernie Sanders and Elizabeth Warren lead in the demonization of people with wealth – with the rest of the Democrat presidential field serving as the “MeToo” chorus (not to be confused with the Democrat feminist #MeTooMovement).

While they castigate people with wealth, virtually all the Democrat presidential contenders ARE people of wealth.  When they condemn those contemptible “millionaires and billionaires,” they fail to admit that they are among them.

The latest billionaire to throw his David Shilling hat in the presidential ring is Former New York Mayor Michael Bloomberg.  He has a net worth of $52 billion dollars.  He will not take any donations but rely on spending potentially billions of dollars on his own campaign.  To become the 46th President of the United States, Bloomberg would actually spend more money than all the 45 previous Presidents combined!

His closest competitor – at least in money – is businessman Tom Steyer, who is worth $1.6 billion – and who has already spent tens of millions of dollars on name-recognition ads (fronting as impeachment ads) before announcing his candidacy.

But money is not everything.  Former Maryland Congressman John Delaney is the third richest Democrat in the race – worth more than $200 million.  Despite his wealth, he is in that “below one percent” category.

Another barely relatively unnoticed candidate – outside of Colorado, where he is the United States senator – is Michael Bennet.  He is worth $15 million.

The next richest person in the race has some ‘splaining to do.  It is Elizabeth Warren with a net worth of $12 million.  While she chagrins the influence of money in politics, she has not been shy on using her wampum as fuel for her own political career.  Interestingly, Warren’s “wealth tax” would not apply to people with her level of wealth.  Surprise! Surprise!

Following Warren is former Vice President Joe Biden, with a fortune of more than $9 million dollars.  That one is particularly interesting because he often talks about his humble beginnings.  At the age of 29, Biden was elected to the United States Senate (turning 30 – the legal minimum age – before the swearing in.)  He was never a businessman, a big-time actor – never invented anything – so how did he get so damned rich from public service?  Hmmmm.  I am reminded of what President Harry Truman famously said: “You can’t get rich in politics unless you’re a crook.”

Another candidate who promotes her alleged “humble beginnings” and a life of public service is California Senator Kamala Harris.  She is worth $6 million.  Humble beginning …  life of PUBLIC service … and $6 million.  What was that Harry Truman said?

Then there is the folksy home-spun Vermont Senator Bernie Sanders.  No one seems to hate the rich more than socialist hypocrite Sanders.  Another story of the humblest of beginnings and a life in public service – and a $2.5 million nest egg.  Bernie is a variation on Robin Hood since he wants to take from the billionaires and give it to millionaires, like him.

A couple of candidates fall short of membership in the Millionaires’ Club.  That includes Hawaii Congresswoman Tulsi Gabbard ($500K) and at the bottom of the list is South Bend, Indiana Mayor Pete Buttigieg ($100K).  If the examples above are indicative, Buttigieg has a bright future in Democrat politics – which should make him one of the millionaires in the near future.

Keep in mind that all these candidates are richer than these estimates.  The reporting requirement a not all that stringent,  Also, does the figure include spousal wealth?  Some assets may be undervalued.  Regardless, they are all much richer than the people they hope to serve.

The wealth disparity between these candidates and their impoverished supporters is wide and growing.  I have always maintained that any political party that depends on poor people as their power base has no incentive to make them rich.  We see this in virtually every Democrat-run major city in which segregated and impoverished voters live in the economic status quo generation after generation.  That does not happen by accident.

It is interesting that so many of these candidates would destroy America’s capitalistic economic system — denying we the people the same opportunities that gave them their fabulous wealth.