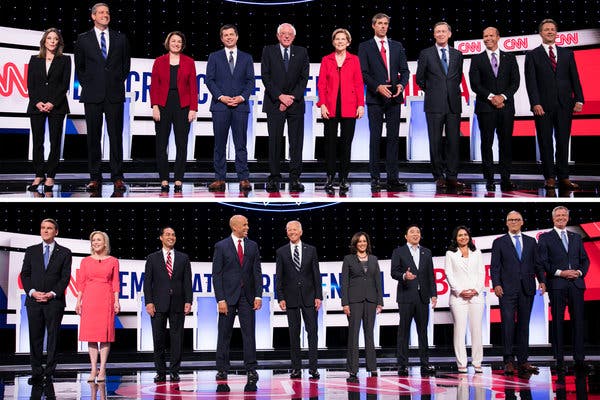 Democrats All Over Each Other in Latest 2020 Debate

All gloves were off in Houston last night, as the nearly 3 hour long Democratic debate, quickly turned into a slugfest between, former VP Joe Biden, and progressive Senators Bernie Saunders and Elizabeth Warren.

Long-simmering policy disputes between the top three contenders and a slew of other candidates exploded onto the stage during the third televised Democratic primary debate, as the candidates — often with loud and angry voices – duked it out on “Medicare-for-all,” immigration, and more.

Intermittent efforts by some candidates to show unity and keep the heat on President Trump repeatedly failed, with most striving instead to score an aggressive debate “moment” onstage in Houston.

Amid the verbal sparring, Pete Buttigieg offered an exit ramp from the feuding as he criticized the Democrats for “scoring points against each other” — prompting Julian Castro to interject, “That’s called an election!”

“Yeah, but a house divided cannot stand,” Amy Klobuchar retorted, to no avail. As the candidates continued to fight with each other, instead of taking jabs at Trump, it could only leave the President smiling.

The economy, which, thanks to Trump’s policies, has performed well by virtually all major metrics in the past year, went largely undiscussed during the raucous three-hour debate. And, even as House Democrats made a push towards potentially impeaching the President this week, that topic conspicuously did not come up either.

A Rumble From the Outset

A tone of conflict was set from the very start of the contentious debate, when Biden set the agenda by going after Warren directly, saying to her, “I know the senator says she’s for Bernie,” Biden said. “Well, I’m for Barack.”

He then tossed this barb at Sanders.

“For a socialist, you’ve got a lot more confidence in corporate America than I do,” Biden shot back at Sanders when the U.S. senator from Vermont suggested corporations would return the money they currently make on high insurance premiums if his sweeping plan were implemented.

These almost immediate clashes settled any questions about whether the top-tier candidates – meeting onstage for the first time – would be pulling any punches. Biden was clearly mindful that Warren has been surging in recent weeks and came out fighting to hold onto his frontrunner status, while several candidates continued to pile on Biden as they have at past debates.

But perhaps the night’s most heated exchange came between Biden and fellow Obama administration member Julian Castro, who tangled at length indirect and seemingly personal terms.

“I’m fulfilling the legacy of Barack Obama, and you’re not,” Castro said, referring to the millions of Americans who lack health coverage — leading Biden to respond, “That’ll be a surprise to him.”

Castro hammered Biden for claiming that individuals would not be required to buy into his health care plan in order to receive coverage.

“You just said two minutes ago they would have to buy in. Are you forgetting what you said two minutes ago?” Castro asked, a seeming pointed jab at Biden’s age. However, Biden did not say during the debate that individuals would have to buy in. Instead, Biden said that individuals would automatically be enrolled if they lost their jobs.

While Castro’s dig at Biden’s age may have seen meanspirited, the former VP was showing signs of wear during the almost 3 hours on his feet, and he did have his share of goofs and gaffes. He repeated more than once the inaccurate claim that children were not kept in cages under the Obama administration. In fact, the most widely circulated photo of children in cages in immigration detention centers, though falsely attributed to the Trump era, was taken during Obama’s presidency.

When asked how can school children be better informed and more articulate today, Biden said they should be sure to, “Play the radio. Make sure the television, excuse me, make sure you have the record player on at night, the phone…”

But perhaps he “stepped in it” the worst time of the night, when he suggested that those who commit “white collar” crime, should never see the inside of a jail cell. “Nobody should be in jail for a non-violent crime,” Biden said. “When we were in the White House, we  released 36,000 people from the federal prison system.”

As Biden continued to trip over himself, and the rest of the field ate each other up, or made outrageous statements like Beto O’Rourke’s, “yes, we are coming for you guns…” clearly, once again, he winner of the 3rd Democratic Debate, was Donald J. Trump!