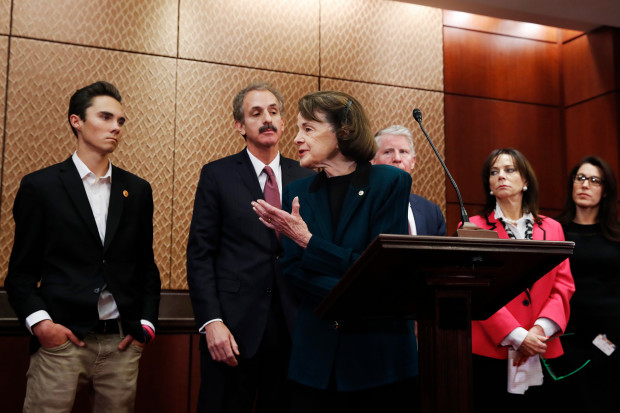 In what has to be the earliest announcement of a congressional candidacy in American history, Parkland High School’s most famous graduate, David Hogg, has announced his intention to run for Congress.  Of course, the 18-year-old young man has to wait seven more years to enter Congress – if he got elected.  That is when he will reach the constitutional age requirement of 25 years.

Hogg began his campaign against gun violence by claiming to be non-partisan. Since that time, he has been coopted and boosted into prominence by the left wing of the Democratic Party.  He no longer pretends to be nonpartisan.  He sees his path to greater political prominence as a Democrat.  But, not just any OLD Democrat.  “Old” is not his thing.

Hogg is intimating that he will be among the hard-left younger generation that is opposed to senior citizens as much as guns.  One can only imagine what he thinks of senior citizens WITH guns.

He claims that Republicans have been successful because they are empowering young people.  Really?  I thought the party of Lincoln was a cobwebbed institution run by rickety old white men.  At least that is what his fellow millennials on the left have been putting out.

In terms of the older generation, Hogg does display bipartisan disdain.  He told Newsweek that “Older Democrats just won’t move the f**** off the plate and let us take control.”

Someone needs to inform David that older people are not obligated to walk off the end of the pier just so he can fish for public office.  He should also not assume that he is smarter and wiser than they are.  At 18, Hogg is filled with the passion of youth – a bit toxic in this case — but lacks knowledge, wisdom and experience.  He actually does not even know what he does not know.

Hogg’s entire case against House Minority Leader and Speaker wannabe Nancy Pelosi is that she “is old.”  That may be, but she is more than likely to be leading the House Democrats whether as Minority Leader or Speaker.

Between now and his run for Congress, Hogg said he will be working on some presidential campaign.  Based on his contempt for anyone born before the turn of the century, one might assume that Bernie Sanders, Hillary Clinton, Elizabeth Warren and Joe Biden will not have the benefit of his support.  He seems to prefer that they join Pelosi at the political hospice?

In the photograph that heads up this commentary, Hogg is seen playing political footsie with one of those who is not moving “the f*** off the plate” for him and his generation — 85-year-old Senator Dianne Feinstein.  On the other hand, checking out his facial expression, one might recognize the look of contempt.

Hogg’s twerpish arrogance seems to have no bounds.  He should keep in mind that the clock keeps ticking and one day he will be an old politician, if that is in fact his career path.  Maybe he will grow to be like that fictional Hogg from the old Dukes of Hazard television show and movies — Jefferson Davis Hogg, known to his friends and adversaries alike as Boss Hogg.

The comparison is not without similarities.  Boss Hogg was arrogant and had little use for people who did not suit his purposes.  He was consumed and corrupted by his own ambitions.  Young Hogg should be forewarned, however.  His older namesake character turned out to be a joke.