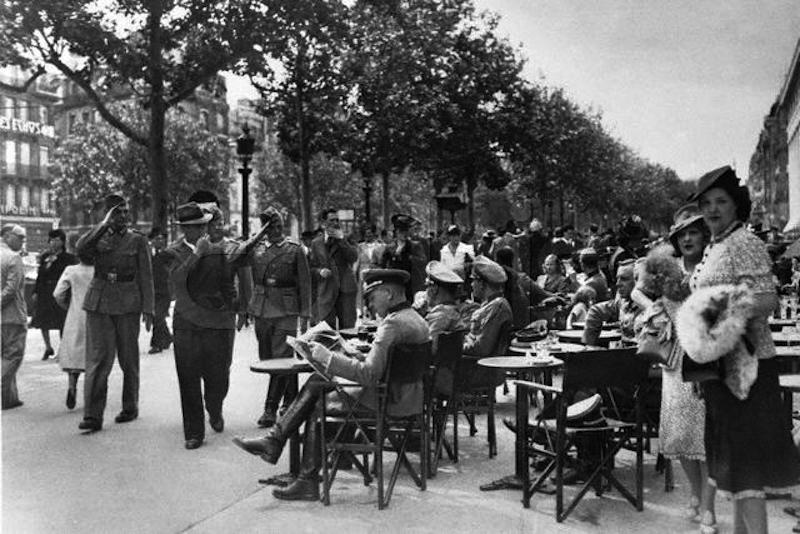 The hours of the Vichy regime forever sully French history and insult the French past and traditions. President Jacque Chirac on July 17, 1995 confessed that the criminal folly of the Nazi occupiers was seconded by the French state. In his new book, The King of Nazi Paris, Christopher Othen recounts the sordid Gothic horror story of a group of malefactors, a gang of criminals, crooks, pimps, corrupt and disgraced police, mafiosi, fallen celebrities, fake aristocrats, pimps, gold traffickers, even a former captain of the French national football team, who worked for the Nazis during World War II against the French resistance. Villains had come out of the shadows of the Paris underworld and played a role during the Occupation, aiding the Nazis at a time when France was a disoriented and confused country.

The Carlingue gang, sometimes known as the Bande de la Rue Lauriston, or Bonny-Lafont, was a major criminal organization under the Occupation. The name Carlingue, the cabin of an aircraft, implies it was an organization of structure and strength. The criminal activity of the gang included looting property — especially of Jewish goods — gold deals, stolen art, protection rackets, but it is most notorious for treason, torture, and murder of members of the French resistance on behalf of the Nazis.

The Nazi handlers allowed the Carlingue gang, said to number 30,000, immunity in return for part of the profits obtained by the gang’s activities and for information supplied. Some of the gang were given Gestapo identity cards to avoid arrest. The gang was not interested in Vichy’s plans for a New France. Nor were they motivated for ideological reasons or pro-Nazi sympathies, but by self-interest, greed, and contempt for conventional morality. Indeed, the investigation of enemies of the Nazi occupiers was a distraction from the main objective, making money.

However, this gang, formed by intervention of the Nazi Reich Main Security Office (RHSA), to conduct counterinsurgency against the French Resistance, became responsible for the deaths of an unknown number of resistance fighters tortured to get information and murdered. The known tortures included the “bathtub,” submerging an individual in a bath filled with ice cold water until he was pulled out by the hair,  the use of portable batteries attached to testicles or nipples, the tearing of nails, the filing of teeth.

At a four-story building with high ceilings and large salons, number 93, rue Lauriston in the prestigious 16th arrondissement in Paris, a plaque is placed in homage to the “Resistants tortured on this site during the Occupation, 1940-44, by French people, auxiliary agents of the Gestapo named Bonny-Lafont.” The building is close to the former headquarters of the Nazi organizations, the Wehrmacht and the Sicherheitsdienst, intelligence agency of the SS.

The leader of the group was Henri Chamberlin, a social misfit who was abandoned as a child and spent a number of years in prison, a petty criminal in the Paris underworld whose life was changed by a chance encounter in a prison camp. He was a petty criminal who had served several prison terms became  the most powerful crook in the country. In the disoriented and confused France after its defeat in the war. Chamberlain asked the Abwehr which occupied Hotel Lutetia for work. At age 38 he became a German agent, and in summer 1942 he was officially named agent BOE43 and  given  Gestapo yellow identity cards with Nazi eagle stamps. Chamberlin adopted the pseudonym Henri Lafont. He was made a citizen of the German Reich, and an officer in the Wehrmacht.

Lafont was a powerful figure, combining various attributes — charisma, intimidation, use of violence – along with immediate access to Abwehr, the German military intelligence agency that reported directly to the German High Command.

Lafont had cordial relations with the principle personalities of the Vichy regime and French collaborators, having tactical meetings not only with Vichy leader Pierre Laval, but Marcel Deat, head of the anti-Semitic National Popular Rally (RNP), and Joseph Darnand, head of the Milice and a Waffen SS officer. He could spring people from prison by a telephone call. As a spymaster, he gave information directly to local Gestapo agents. He probably had more influence with the Nazis than did Laval. Lafont protected the Duc d’Ayen, whom the Gestapo wanted killed; instead Lafont used him to blackmail the Paris Gestapo. He protected the Peugeot factory. He appeared to be uneasy hunting down French patriots, and had little interest in anti-Semitism, as shown by his protection of Joseph Joinovoci, a corrupt Jewish scrap-metal dealer. At times, Lafont had delusions of ambitions, thinking he might become police prefect of Paris.

Lafont was joined by Pierre Bonny, once the best known, if notorious and corrupt, policeman in Paris. Bonny had been involved in sensational cases:  the Guillaume Seznec  case where Bonny was accused of falsifying evidence; the Alexander Stavisky case of January 1934; and Albert Prince , adviser to the Paris Court of Appeal, whom he may have assassinated.  Bonny was involved in blackmailing criminals, and those officials caught with prostitutes. In 1935 Bonny was jailed for three years for corruption.

Lafont was the French Godfather. He was approached by people paying respect, he arranged protection, he settled disputes. Even Maurice Chevalier came to ask a favor since he had been criticized for performing in some Occupation revues, though he was hiding a Jewish family in the free zone. Lafont helped Violette Morris, the troubled bisexual race-car driver and prominent athlete and cigar smoker, and collaborator. Lafont protected the notorious serial killer doctor Marcel Petiot. Among Lafont’s recruits was the celebrated football player, Alex Villaplane, the first player of North African origin to represent France.

Lafont bankrolled a production of Bernard Shaw’s Pygmalion. Though he lived in a world of double crossers, spies, and informers, he prospered and became accustomed to the high life, traveling in a white Bentley, wearing an SS Hauptsturmfuhrer uniform as well as the best clothes, dining at Maxim’s and restaurants serving sole and pressed duck and oysters. He was a lover of orchids, and a host of lavish parties with socialites, young actresses, business people, press barons, and German officers. Women with titles and pedigrees fell into his bed.

The Bonny-Lafont gang looted property, especially Jewish property, made gold deals, were involved in the protection racket, traded on the black market, stole art, and most important infiltrated resistance groups, and caused the death of their members. Lafont had ambitiously planned to enlist  50,000 North African, POWs  from German camps, into a private army he would control. Instead, a paramilitary group, Brigade Nord-Africain, was created in January 1944 by Lafont and the Algerian nationalist and anti-Semite Mohamed el-Maadi. It was composed of Muslims recruited among North Africans living in France, mostly in Paris, to fight against the French Resistance. In reality, they were more criminals and murderers, more engaged in atrocities against civilians, than in fighting the Resistance.

With the Allied invasion of France, life changed for heroes and villains. Ernest Hemingway was at the Ritz, Edith Piaf was singing at Ciro’s, the 16th arrondissement restaurant, U.S. and UK troops were dining free at the Tour d’Argent.  As the Allied troops were nearing Paris, Lafont  ordered the dismantling of Carlingue, the files were burned, and members of the gang fled. Lafont was arrested living on a farm, and sent on trial at which a host of issues were discussed: spying for the Abwehr, a mission to Algiers, the Duc d’Ayen affair, theft of silverware from the U.S. embassy, the Brigade Nord-Africain,  and the arrests and murders for the Gestapo.

The jury on December 12, 1944 found Chamberlin-Lafont and his associates guilty and sentenced them to death. Charles de Gaulle, then head of the Provisional Government of France, denied clemency.  The French courts of justice executed 1,500 between October 1944 and January 1951, Chamberlin-Lafont was among them on December 26, 1944.  He had three lives; orphan, criminal, power player in Occupied Paris. His time was up: “I bet on a bad horse. I lost, the time of holding four aces in my hand is over.”