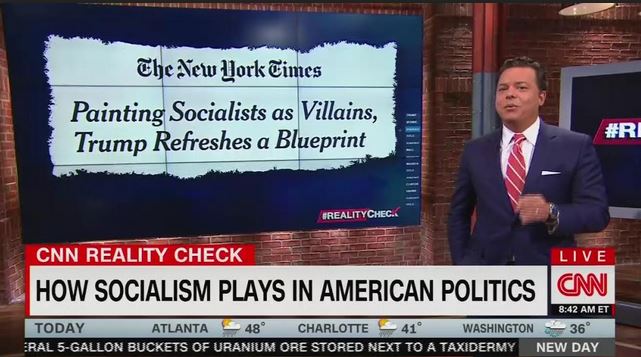 Several months ago, CNN launched a new segment called “Reality Check.” It features the smug John Avlon, who also regularly shares the anchor as the network’s Senior Political analyst. In other words, their on-set “yes man.”

Avlon came to CNN from the Daily Beast, where he was the head beast. In those days, he was one of those regular bobblehead “contributors.” Seriously. Every time a host or guest would make a derogatory comment about Trump, Republicans or conservatives,  Avlon would give it his smarmy smile and his head would … well … bobble up and down.

He was so good at playing into CNN’s anti-Trump narratives that they hired him full time and gave him his own segment to present an anti-Trump prosecution brief on a regular basis. After each prejudicial presentation, anchors John Berman and Alisyn Camerota would bolster his biased offering with such statements as “That is really great information, John” or “You really bring out the fact so clearly” or “You really tell people what they need to know.”

Avlon builds his case against Trump with selective facts, agonizing interpretations of those facts – while leaving out facts that refute those he presents – and outright disinformation. His “Reality Check” is not meant to educate the public – or to tell both sides of a story. It is to indoctrinate along the lines of the network’s various political false narratives. In short, Avlon is CNN’s chief propagandist. He earns that title despite intense competition form many of the other on-air personalities in the CNN stable.

Avlon used his platform to defend the rise of socialism within the Democratic Party, his favored political entity – and to call out Trump, Republicans and FOX News for criticizing the authoritarian concept. He selected a dictionary definition of socialism as “economic and political theories advocating collective or government ownership and administration of the means of production and distribution of goods.”

That definition, in and of itself, should elicit condemnation of the political theory but he failed to complete the definition. It is also defined as “a transitional social state between the overthrow of capitalism and the realization of Communism.” If you think that is not the ultimate goal, just listen to all those Democrats condemning capitalism these days.

Avlon claims that all those examples of failed socialism that brought deaths and misery at the hands of brutal despots is … old news. Since World War II, he says that world poverty rates have been cut in half – implying that it was due to the rise of socialism in a few countries. Based on a reality check, it would be more accurate to attribute the decline in poverty on capitalism – with nation’s like China and Russia taking on more capitalistic policies.
With the image of Senator Elizabeth Warren in the background, Avalon takes it upon himself to say that free college tuition and government-run healthcare is NOT socialism. He segues into class warfare with an attack on those Senator Bernie Sanders dubs “the one-percenters.”

Avlon goes on to criticize Republicans for “crying wolf” over socialism. He points out that Social Security and Medicare were decried as socialist when they were proposed and now they are popular. Because they have become part of the American economic fabric – and have attained a level of popularity – does not mean that there were not steps toward socialism. They were.

In his conclusion, Avlon declares that criticism of socialism in America is merely “political hype.” Just what a good left-wing propagandist would say.
That is only one example of the type of biased reporting Avlon and CNN pass off as a reality check. Virtually every one of his segments could be refuted in a fact-based counter argument. But those facts are banned and censored by the folks at CNN and that is why their “Reality Check” is anything but …