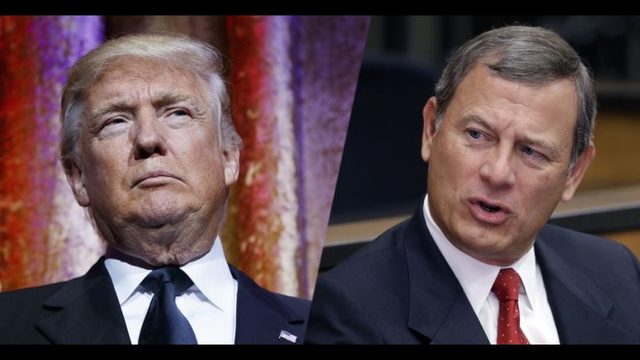 Chief Justice Roberts. Who you trying to kid?

In what has been widely described as a not-so-subtle rebuke of President Trump’s criticism of the federal courts in the Ninth Judicial District, Chief Justice John Roberts made his case for the independence of the American judicial system. He said:

“We do not have Obama judges or Trump judges, Bush judges or Clinton judges. What we have is an extraordinary group of dedicated judges doing their level best to do equal right to those appearing before them. That independent judiciary is something we should all be thankful for.”

Okay! That may be what a Supreme Court justice might say in an address to the graduating class of Duke University Law School or the annual convention of the National Bar Association. But, as a serious response to presidential criticism of liberal activist federal judges, Roberts is soiling his long black robe by treading into the murky political waters.

Granted that Trump’s verbal attacks on the courts is a bit maladroit and excessively pugnacious, but he is not wrong. In fact, his pointing to judges playing out the political philosophies – or not – of the presidents who appoint them is common fodder of political discourse.
Hypocrisy rears its head.

Democrats, who now celebrate Roberts’ self-laudatory remarks and elementary-level description of the federal bench, we loud in the complaints about the partisanship of the judges that re-affirmed the election of George Bush the Second in 2000.

In fact, the most notable exceptions to justices reflecting the politics and philosophies of the presidents who appointed them is when supposedly conservative lawyers and judges appointed to the courts by the relatively more conservative Republican presidents have been known to veer off to the left – Justices David Souter, Anthony Kennedy and even Roberts, to a degree, are just the latest samples. More consistent with the culture of their party, liberal Democrat judges tend to remain dogmatic to the philosophy of the presidents who appoint them – often becoming more liberal as their party steers to the port side.

If there was any truth in Robert’s grandiose claim, we would not see so many decisions decided along “political lines.” And that seems to be more the case as you rise up the levels of the federal court systems. District tend to be less politically predictable largely because their cases are more specific to the issues of the crime or the civil issues. They are rarely deciding matters of overarching constitutionality. The federal Appellate or Circuit courts tend to be more political in general – and the Ninth District especially.

When it comes to the Supreme Court, however, there is a very strong correlation between the decisions and the political views of the president who nominated them. The entire process is political. Most of those sitting on the Federal courts had resumes that involved significant political involvement. There philosophic (read that political) leanings are not only known, but a major factor in their selection.
In saying that there are no Obama, Bush, Clinton or Trump judges is simply wrong. We have long understood that how a justice will vote is directly correlated to the president who nominated them. It is a form of political shorthand. To say that Justice Sonia Sotomayor is an Obama justice informs us how she will vote — and why she did vote the way she did — on all those divisive POLITICAL issues that come before the court.

While Roberts’ response was more in the spirit of a cheerleader than a referee, there is the question as to whether he should have engaged at all. There is a bit of an irony in Roberts’ proclaiming the courts to be independent of the political climate de jure and then he creates – at least by intimation – a political controversy. He had to know that his comment would not go without a response from Trump – even many responses

Perhaps because he was appointed by Republican Bush, Roberts’ feels a sense of pre-emptive absolution in becoming political against a Republican President. Regardless, judicial tradition – more in theory than fact – has it that these comments by sitting justices are inappropriate. It was not too long ago that Justice Ruth Bader Ginsberg felt obligated to make a public apology after insulting the President.

Just because one can concede that sharp words between a President and a Chief Justice has a modicum of news value does not mean it should be elevated and twisted into a major confrontation. Of course, the #NeverTrump news would have you believe that Trump and ambushed Roberts in a dark alley. In the media’s biased analysis, it would seem that this exchange of words will bring down a Republic that has withstood wars – including a Civil War – depressions, the 1960s Days of Rage, terrorist attacks, presidential impeachments, assassinations and the presidency of Jimmy Carter is about to teeter on the brink of collapse over a little friction between the Executive and Judicial branches.