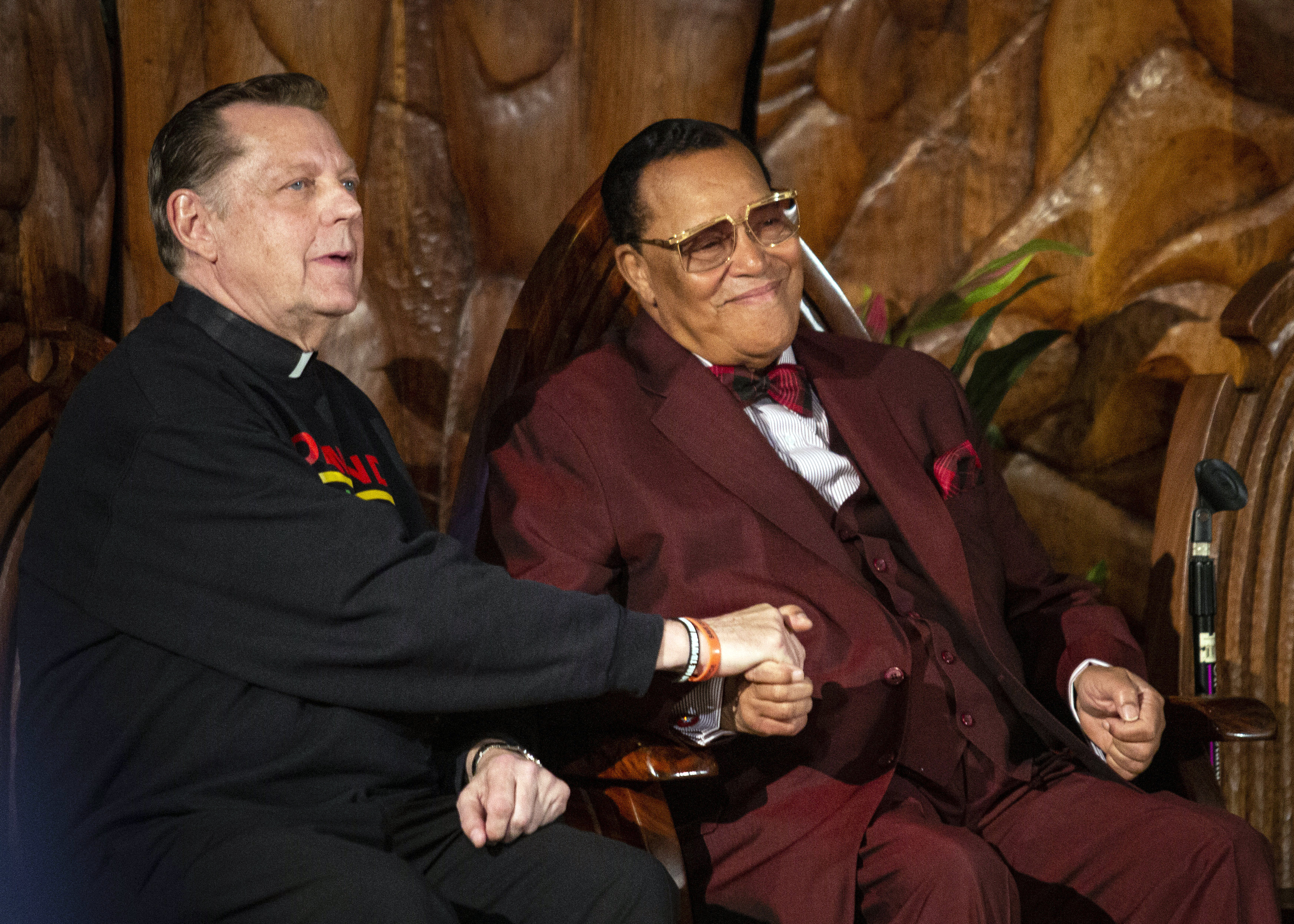 One would hope that when a Christian clergyman invites a Muslim minister to share the sanctuary, it would be a good thing.  You know, a show of harmony and brotherly love.  That is how men of the cloth are supposed to be.

But not when the men a Chicago’s radical show-boating Catholic priest, Michael Pfleger, pastor of St. Sabina Church, and the guest of (dubious) honor is the Nation of Islam’s bombastic, racist and antisemitic Louis Farrakhan.

The reason for the invitation is ironic.  It seems that Facebook banned Farrakhan for his hateful sermons and speeches.  Using that rationale, one might expect Pfleger to next invite the head of one of the white supremacist groups to preach to his predominantly black congregation.  It would give hatred an equal opportunity.

Pfleger has long been a crown of thorns on the heads of the prelates of the Chicago archdiocese for decades – and the current incumbent, Cardinal Blase Cupich, has not been spared.  In response to the appearance by Farrakhan, his eminence issued a statement of rebuke.  In it, he said:

Without consulting me, Fr. Michael Pfleger invited Minister Louis Farrakhan to speak at St. Sabina Church in response to Facebook’s decision to ban him from its platforms. Minister Farrakhan could have taken the opportunity to deliver a unifying message of God’s love for all his children. Instead, he repeatedly smeared the Jewish people, using a combination of thinly veiled discriminatory rhetoric and outright slander. He suggested that “Talmudic thought” sanctioned pedophilia and misogyny. He referred to Jewish people as “satanic,” asserting that he was sent by God to separate the “good Jews” from the “satanic Jews.”

Cupich went on to say:

Such statements shock the conscience. People of faith are called to live as signs of God’s love for the whole human family, not to demonize any of its members. This is all the more true of religious leaders, who have a sacred duty never to leverage the legitimacy of their ministry to heap blame upon a group of persons, and never to deploy inflammatory rhetoric, long proven to incite violence. Antisemitic rhetoric — discriminatory invective of any kind — has no place in American public life, let alone in a Catholic church. I apologize to my Jewish brothers and sisters, whose friendship I treasure, from whom I learn so much, and whose covenant with God remains eternal.

Pfleger, himself, has often been accused of preaching a racist gospel – raising the tropes of white privilege.  Though a blue-eyed, blond-haired German, Pfleger preaches in the voice and style of the stereotypical black Baptist preacher.  It is a put-on that he believes helps him relate to his flock.  Does “pander” come to mind?  It has always struck me as patronizing – sort of a vocal version of blackface.

if you are curious about Pfleger’s style and his politics you can take in his defense of then-candidate Barack Obama.  It has been these kinds of political endorsements from the pulpit that have raised questions of the Church’s tax-exempt status.

The one thing Pfleger and Farrakhan have in common is using a supposedly religious platform to advance narrow partisan political views.  They are not the first to use religious ministry to promote their political views.  Jesse Jackson and Al Sharpton have made a very successful and lucrative career doing just that.  And it does not only come from the left.  Televangelist Pat Robertson has plowed those fields from the right. But none of them have risen to the level of Pfleger and Farrakhan in provoking animus in the name of godly love.

Like others of the breed, Pfleger and Farrakhan have passionate followers who have kept them in their respective pulpits.  There were times when it appeared that the Archbishop of Chicago would reassign Pfleger – especially since he has been at St. Sabina’s much longer than the rules generally permit.  He has been previously rebuked, but never replaced – and even in the aftermath of this egregious performance, it is unlikely that Cupich will have the testicular fortitude to do so.