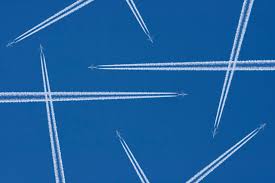 Control of the masses seems to be an underlying theme throughout history at some point.  We’ve seen tyrants and dictators like Hitler and Mussolini control their people by force up to and including death.  Mussolini put fluoride in the public water supply in Russia.  Many do not know that he did this to dumb down the population.  Fluoride is the 2nd most deadly neurotoxin on the planet next to mercury.  Mussolini knew this.  One might ask, why then do we in American get the liberty of fluoridated water?

For over ten years people have been noticing thick white mist trails being left in the sky behind jet planes that do not act like usual condensation trails or contrails.  These are called chemical trails or chemtrails.   But, what exactly is a chemtrail?  A chemtrail is said to consist of aluminum, barium, and strontium.  Aluminum for one is connected to the contraction of Alzheimer’s Disease.  All of these heavy metals are toxic and can cause serious illness and disease if one ingests or is exposed to high concentrations of them.  Mixed together, they are sprayed at high altitude into the atmosphere in an aerosol type form.  They appear in the sky apparently from the engines of jet planes or from an exhaust configuration.  These chemicals proceed to fall on our skin, in our water, in our soil, and on our food which then contaminates us.  This is considered a form of geo-forming the earth or geo-engineering.

Chemtrails are said to electrify the soil which is good for growing genetically modified organism plants or GMO plants.  Frankenfood in fact.   The cover story for the so-called true use of chemtrails is to reflect some of the sun’s rays back to the sun in order to help prevent and reverse global warming.  In a speech given by Executive Director of U.N. Food Distribution Catherine Bertino on September 14, 1997, at the U.N., the director stated that “Food is power, we use it to control behavior…we do not apologize.”  This statement gives precedent for a plot to control the population by any means.

Those that opposed the chemtrails theory say that what people are actually seeing are condensation trails or contrails.  They also say that people are merely witnessing crop dusters or excess gas expulsion or just exhaust from the jets engines.  The only problem is that crop dusters are low to the ground while chemtrails are witnessed from very high altitudes and jet exhaust is usually dark in color while chemtrails are white in color.  But the number one identifying quality of chemtrails is that they linger around for hours and don’t dissipate as a contrail would traditionally.

Thirty-two states have current legislation on the books concerning weather modification.  At the time of the 2008 Olympics, China was openly controlling the weather.  There has been journalistic reporting of China creating artificial snowfall in Beijing.  But chemtrails are taking rain dancing to a whole next level.  But, this would not be the first time that American citizens have been used as guinea pigs and lab rats.  Take the Tuskeegee Experiment and the nuclear weapons testing in Nevada from 1951 to 1963 to name just a couple.  Remember America has and still is using eugenics to get rid of its undesirables.  This is nothing new just hidden truths.  An article from the National Institutes of Health confirms that chemtrails are real could be responsible for various forms of neurotoxic conditions which would include but not limited to MS.

Another term for chemical trails is stratospheric aerosol geoengineering or S.A.G.  Mauro Oliveira is the webmaster of GeoEngineeringWatch said that aluminum became a concern to many after the America Association for the Advancement of Science (AAAS) meeting. This is where independent journalists reported that scientists were discussing the logic behind spraying 10-20 megatons of aluminum into the atmosphere during a SAG campaign.

Based on much of the data and facts gathered, one can consider this more like a conspiracy fact vs. a conspiracy theory.  The information is out there.