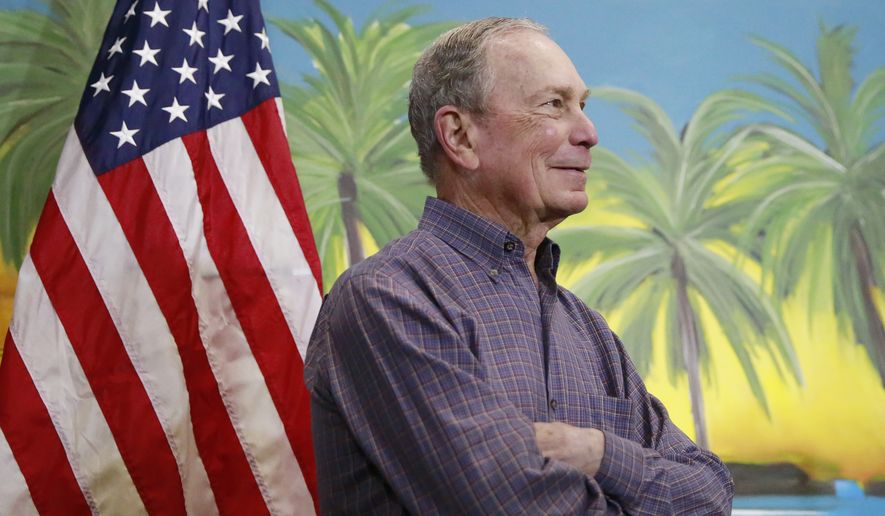 Among the mainstay narratives of the Democratic Party is that money corrupts politics — and that the division between the rich and poor is a national crisis.  Those claims have always been a bit hyperbolic, but now they are downright hypocritical.  Thanks go to former New York Mayor Michael Bloomberg for exposing it.

If, as expected, Bloomberg keeps his pledge to use hundreds of millions of dollars to elect former Vice President Joe Biden, Democrat House and Senate candidates and an untold number of Democrats to state and local office, he will be living proof that all that left-wing talk about money corrupting politics was empty political talking points.

By dangling dollars in front of the Democratic Party — like  carrion in front of vultures — Bloomberg exposes the whore-ish underbelly of left-wing politics.  Their governing principle is to do whatever is necessary to win.

While his socialist policies are as bad and crazy as can be, at least Vermont Senator Bernie Sanders has the courage of his misguided convictions.  He has stated that he does not want Bloomberg’s money and would not take it if he were the nominee – as unlikely as that may seem today.  And that goes for all those other billionaire fat cats.

Conversely, Biden, Democrat National Chairman Tom Perez and every other Democrat and progressive fundraising organization are on their knees kissing Bloomberg’s ring (one would hope) with hands outstretched.

In their lust of his wallet, the entire Democratic Party has tossed aside their longstanding objection to the influence of big money in politics.  They are reminiscent of what one-time southern Democrat senator said when asked how much he needed for his campaign.  He replied. “All I can get.”

Our ridiculous federal election laws prevent guys like Bloomberg from donating big bucks directly to federal campaigns – President, Senate and House.  But they can do two things – use their cadre of friends to bundle lots of $2700 donations.  But even better, they can set up what are known as “independent expenditure committees” and fund them with as much of their money as they like.  No limit.

This loophole enables a guy like Bloomberg to advertise nice things ABOUT a candidate as long has he does not talk TO or conspire WITH the candidate.  Only a Congress would come up with nutty laws like that.

Ever since they passed the federal election laws of the 1970s, I have been a constant critic.  It makes no sense to restrict what a candidate can accept in donations and still allow the creation of these loophole committees that pour billions of dollars into the process.  We should allow unlimited direct contributions, have larger contributions publicly reported and let we the people decide what we think about the contributors and the candidate taking the money.

Since campaign money is used to “get out the message,” I like to think that every candidate will have the resources to tell his or her story to the voters –and not be defeated by a LACK of money.  Money spent on campaigns is good for democracy – hell, it is essential.  Let the candidates take in the money and get rid of all these external committees over which the candidate has no control over the message.

On the final analysis, it is NOT the fact that Bloomberg is willing to spend so much money to support candidates – let him – but let all the candidates who do not have such a bank-roller compete by raising sufficient money.  Besides, all that money spent on campaigns is good for the economy.  Think of all the people and businesses they hire or retain.

So, I am not pointing at the money, but at the gross hypocrisy of the left-wing Democratic Party that talks against big contributions while eagerly soliciting them.