Biden confronts auto worker about the Second Amendment – and insults him 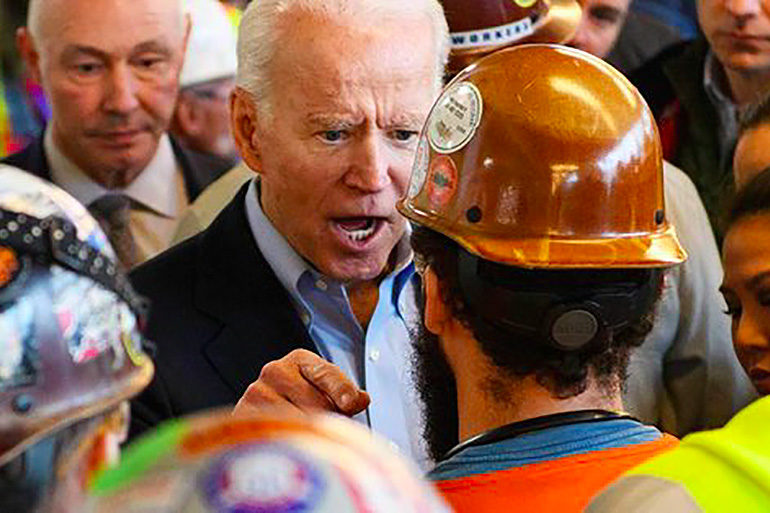 Former Vice President Joe Biden had some choice words for a Michigan auto worker at a campaign stop on Tuesday.

The presidential candidate was visiting the Detroit plant where the Fiat Chrysler is produced when worker Jerry Wayne decided to ask Biden how he planned to help union workers. But he also asked him about his position on the Second Amendment.

“I also asked him how he wanted to get the vote of the working man when a lot of us wield arms,” Wayne said in an interview on Wednesday that was reported on in USA Today. “We bear arms and we like to do that.”

Video of the exchange shows Wayne accusing Biden of “actively trying to end our Second Amendment right” and “take away our guns.”

Wayne pressed the issue, however, especially regarding Biden’s support for banning semi-automatic rifles, one type of which Biden mistakenly referred to as an “AR-14” (the AR-15 is a common type of rifle). Biden, visibly angry, told Wayne not to act like “such a horse’s ass.”

Biden “went off the deep end,” Wayne said of the exchange.

In spite of Biden’s harsh reaction, Wayne said he didn’t feel insulted by the former Vice President. He felt the real problem was Biden’s lack of a genuine answer. “He wanted to listen to my question and I don’t think that he was ready for it,” Wayne said.

“It was a little bit disturbing to see that a politician wants to take away my right to defend myself,” Wayne continued. “What we need to do is we need to concentrate on teaching people how to respect firearms and how to use them, not take them away.”

Wayne said that it had been an “absolute privilege and an honor to be the voice of Americans” regarding the Second Amendment. “This is a right that we need to protect with our heart and soul.”