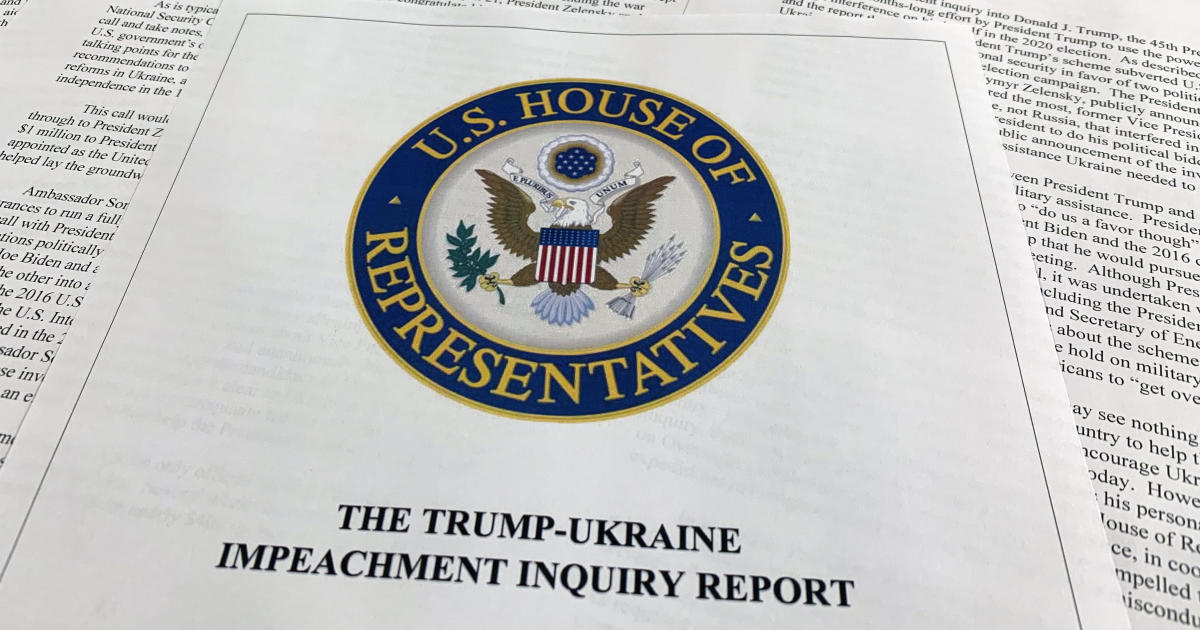 Accusations of Abuse of Power as House Impeachment Report Is Released

Congressional Democrats have now released their scathing nine-point impeachment report, which accuses President Trump of abusing his office for partisan advantage in the Ukraine scandal, and of then seeking to obstruct the probe of his misdeeds.

The landmark report says the Intelligence Committee’s investigation determined that President Trump used $391 million in aid to Ukraine and a White House visit for its president, as leverage to force the embattled nation to announce “unfounded” investigations into Joe Biden and his son, as well as a conspiracy theory about the 2016 election.

The 300-page report comes less than 24 hours before the House Judiciary Committee is scheduled to begin taking up the case with its first formal impeachment hearing Wednesday morning. The report is expected to be transmitted to that committee following an evening vote and would form the basis for any articles of impeachment to be drafted.

It said the inquiry “uncovered a months-long effort by President Trump to use the powers of his office to solicit foreign interference on his behalf in the 2020 election.”

White House Press Secretary Stephanie Grisham swiftly hit back in a statement slamming the nature of the Intelligence Committee’s inquiry and claiming it failed to prove any wrongdoing on Trump’s part.

“At the end of a one-sided sham process, Chairman Schiff and the Democrats utterly failed to produce any evidence of wrongdoing by President Trump,” Grisham said. “This report reflects nothing more than their frustrations. Chairman Schiff’s report reads like the ramblings of a basement blogger straining to prove something when there is evidence of nothing.”

That phone call was at the center of the report, which said that “The President engaged in this course of conduct for the benefit of his own presidential reelection, to harm the election prospects of a political rival, and to influence our nation’s upcoming presidential election to his advantage,” the report said. “In doing so, the President placed his own personal and political interests above the national interests of the United States, sought to undermine the integrity of the U.S. presidential election process, and endangered U.S. national security.”

Trump has denied wrongdoing and said his call with Zelensky was “perfect,” while maintaining there was no such quid pro quo tying aid to investigations. One key witness, E.U. Ambassador Gordon Sondland, alleged a clear quid pro quo involving a White House meeting and a “potential quid pro quo” involving the aid — but also acknowledged he never heard those conditions from Trump directly.

Zelensky has also denied there was any pressure put on him or any talk of a quid pro quo between the two leaders, but he did recently criticize the decision to delay the aid.

Meanwhile, Republicans drafted a report of their own, which rejected most, if not all of the claims, made by the Democratic majority.

“The evidence presented does not prove any of these Democrat allegations, and none of the Democrats’ witnesses testified to having evidence of bribery, extortion, or any high crime or misdemeanor,” the GOP report said.

With the Intelligence Committee’s report in their hands, the Judiciary Committee is next going to call constitutional law experts to testify regarding the relevant legal principles involved in impeachment, before determining whether or not to approve articles of impeachment, which would then go to the full House for a vote.

If the House should vote to impeach, the Senate would hold a trial, where a two-thirds majority would be needed to convict.